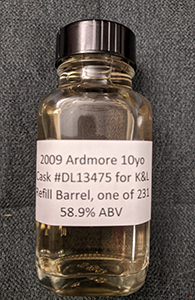 Oh no, it’s another peated whisky. For a change, however, it’s a very recently released whisky and in fact it may still be available—yes, I checked, it is. It’s another from K&L’s recent parcel of exclusives from the Laing companies. As you know, some of my reviews from this batch have endeared me even more to K&L’s staff. What can I say? I’m easy to love.

Anyway, Ardmore: usually good, and usually not very much of it available from the distillery’s owners. Last year I reviewed a 22 year old released to mark the 20th anniversary of the Old Malt Cask line (another Laing property) and really liked it. This one is about the half the age of that one. It’s from a barrel which might bode some risk of over-oaking—barrels are smaller than hogsheads—but it’s a refill barrel. I’m a fan of Ardmore’s brand of fruit and highland peat. Let’s hope it’s on display here.

Nose: A very nice blend of citrus (lime peel), cut leaves and dry, peppery, mineral smoke. As it sits the citrus gets a bit musky and a cereal note emerges as well. Maltier as it goes. Water pushes the smoke back and pulls out some sweeter fruit (apple, a hint of peach).

Palate: Comes in a bit sweeter on the palate but is otherwise as promised by the nose. Very nice texture and quite approachable at full strength. On the second sip the peat moves in the direction of hot tarmac (what, you’ve never licked hot tarmac?) and there’s a bit of honey as well heading into the finish. The smoke gets just a bit of rubber/putty around the edges as it sits (the first major sign of youth). Water pulls out more fruit on the palate as well—the lime expands and gets sweeter—but the smoke is still here, joined now by some wet stones.

Finish: Long. No new development here but also no falling off. As on the palate with water.

Comments: Oh, this is very nice. If the distillery were to bottle a 10 yo on par with this it would be up there with the best of the young OB age-stated whiskies. It’s right at the cusp of youth and maturity and the mix of citrus and peppery peat is really very good. If I lived in L.A I would buy a case of this to sock away for daily drinking. And, yes, I’d buy a case of this over one bottle of K&L’s Clynelish 23, 1995 without a second thought. I am a foolish person, I know.