As I’ve mentioned before, after two weeks in Delhi in January we went down to Goa for a week. Old college friends have a lovely home in South Goa that they opened up to us. Ten minutes from Cavelossim Beach and far, far away from tourist-intensive North Goa, this was as idyllic a family vacation as we could have hoped for—especially given how cold it was in Southern Minnesota at the time! We hired a cook from the village to cook breakfasts and dinners for us—the latter all centered on fish and shellfish I purchased from the local market (see my report on those shopping expeditions). Lunches, however, we ate out. Alas, our lunch on our first full day was not very good. Ignoring the warnings of far better informed people, we chose to eat at a shack at the beach. The food was marginal and the convenience of not having to leave the beach to eat it was not any consolation. We’d eaten dinner out as well a few hours after arrival the previous night, and while that had been a lot better than our beach shack lunch, it had not been any great shakes either. My dream of eating excellent Goan food twice a day was in danger of fizzling before our week even got properly underway—especially as miscommunication with our cook resulted in his preparing a debut dinner later that day that was centered mostly on sugar (I said, “put a pinch of sugar in the boys’ dal”, he proceeded to put a LOT of sugar into everything). Thankfully, everything was reset at lunch on our second full day. That lunch was at Martin’s Corner. We didn’t have a bad meal after that.

I said we were in South Goa and that one of the big advantages of being in the south rather than the north is that the north is completely overrun with tourists from elsewhere in India and from parts foreign. This is not to say that there were no tourists at Cavelossim Beach but the milieu was generally peaceful and the beaches pristine. The big disadvantage though, we had been warned, is that the South by the same token has far less interesting and/or high quality restaurant options than the North. However, that is not to say that there is no good food to be had south of Panjim—we had three very good meals—but we had to drive a bit away from Cavelossim to eat them.

Martin’s Corner—which had been recommended by a lot of friends—was the first of these meals. The restaurant is located in Betalbatim, about half an hour’s drive north from Cavelossim though still half an hour south of the airport which more or less demarcates the North/South divide. The restaurant opened in 1989 with very few tables but is now an altogether larger affair. As per our driver—we’d engaged a car and driver from the village we were staying in for the duration of the trip—it is very popular with celebrities as well; indeed the restaurant has a wall covered with photographs of actors and cricket players and so forth who’ve eaten there. I’m not sure how current this popularity with celebrities is but I can tell you that the food is quite good.

The restaurant may have started out small in 1989 but it is now, as you will see below, large and expansive. The interior is not walled off; it has the feel of a large verandah and quite a lot of charm—though the ceiling fans make keeping your napkins on your table a bit of a challenge. Like every other restaurant in Goa, seemingly, its walls are replete with art in the style of the late, great Goan cartoonist, Mario Miranda. I didn’t look closely at the examples at Martin’s Corner, assuming they were in fact by Miranda—a few days later, however, I’d begun to have my doubts about just how many restaurants could possibly have murals by him! We were there for an early lunch—by Indian standards—and it was beginning to fill up as we left. I can see how it would be a really fun atmosphere in the evening.

To the food! The menu includes a large number of dishes from the North Indian, Indian Chinese and “Continental” repertoires. Our focus, however, was on the Goan dishes. Well, our boys derailed this focus a bit (see below). As we were just the four of us at every meal out on this trip, and as we were always going back to the very warm beach for 3-4 hours after lunch, we couldn’t do much damage at any of the restaurant meals we ate. This was particularly distressing at Martin’s Corner where there was a lot on the menu that we wanted to try. Regretfully, we restricted ourselves to only a few things, determining that we would try the others at the other restaurants we would eat at.

What did we eat? We got the squid butter-garlic (very good), Goan sausage chilly fry (excellent) and sorpotel (excellent though sans blood as per our server). All mopped up with excellent pao. For the boys we got the fish fingers—very nicely marinated and batter-fried and served with a very good dip—and butter naans. Having eaten excellent naans in Delhi (especially at Punjabi By Nature) they demanded naans at every restaurant that had them; and as the first rule of vacationing with small kids is that you feed them whatever they will happily eat we did not demur as long as they ate local dishes as well. At this meal they loved the fish fingers and the squid butter-garlic—the other two dishes were too spicy for them. And they also loved the chocolate mousse they split for dessert. And I really enjoyed my bebinca (the first of a few eaten over the week).

Take a look at the space and the food in the slideshow below and scroll don for thoughts on service and price and to see what’s coming next. 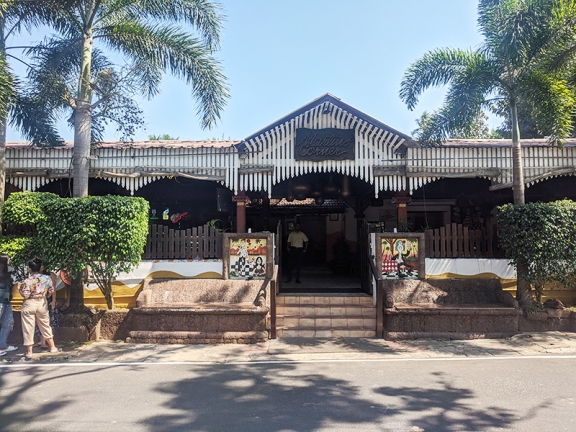 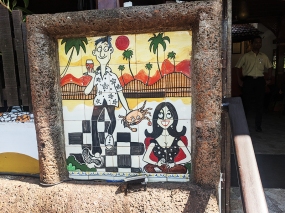 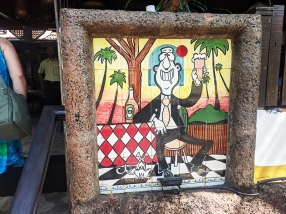 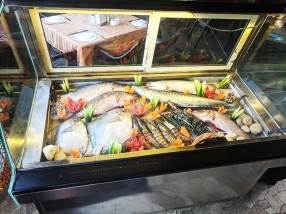 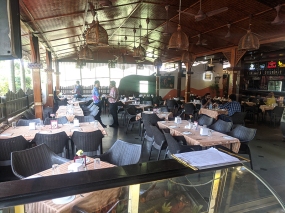 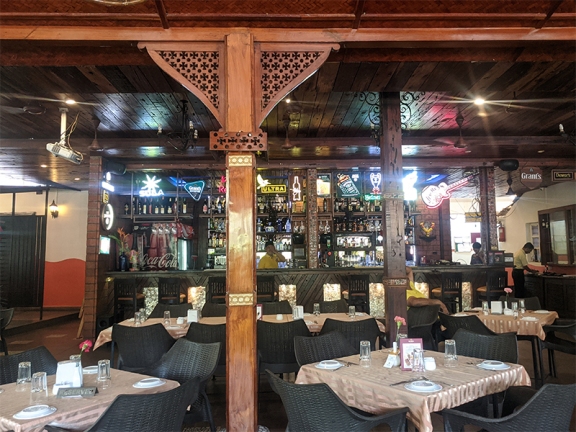 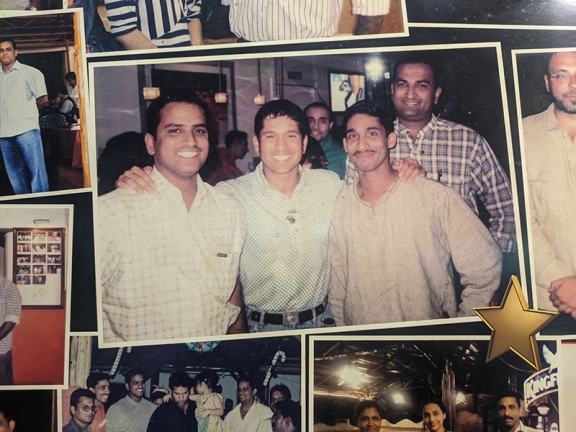 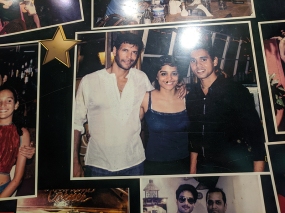 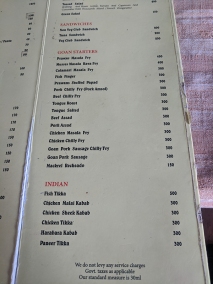 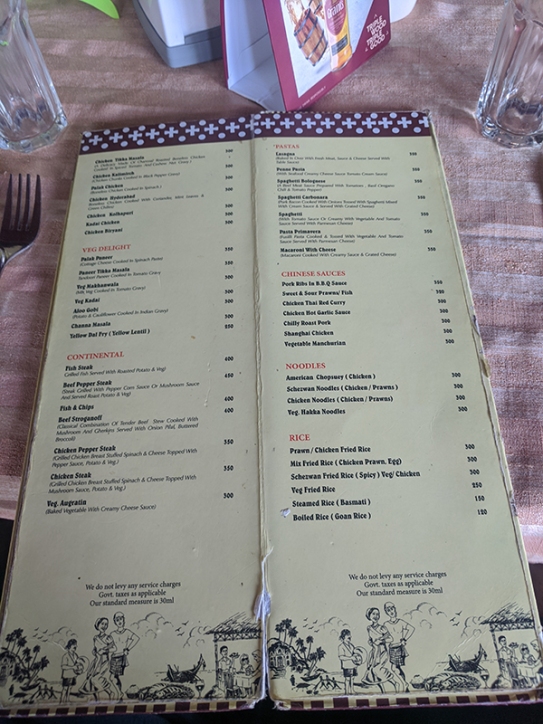 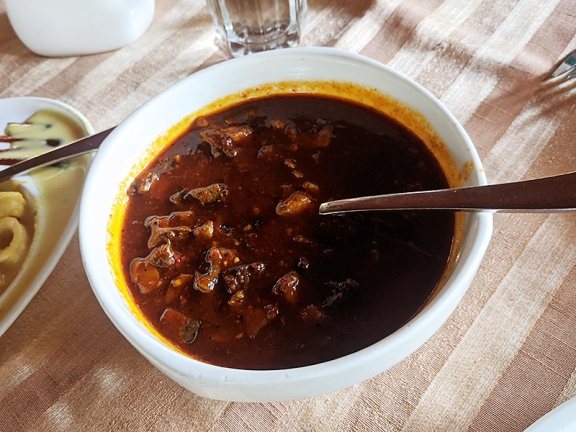 Portions, as you can see, were not small either. It pained us to not finish this. 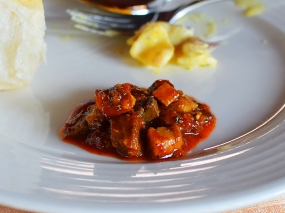 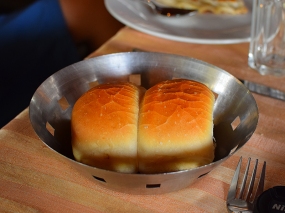 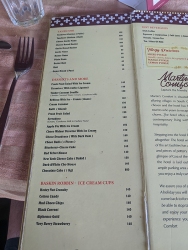 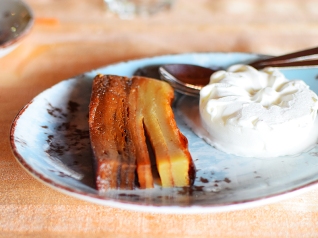 Service was very friendly, very helpful, very present when needed. All of the above came to just about Rs. 2100 with tip or just about $30. A crazy good deal for our American wallets (and about 2/3 the price we’d paid at a more touristy place in Cavelossim the night before for food not quite as good). If we ever make it back we are definitely eating here again and next time we’ll probably try their seafood specials.

Up next from Goa: not a restaurant but a distillery. I took a tour at the Paul John distillery, which entirely coincidentally turned out to be about 15 minutes away from our house. More on that later in the week.