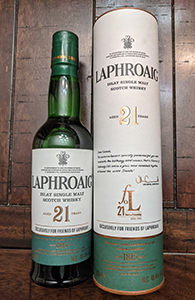 Today is my 50th birthday. And to mark the occasion I have a review of a whisky from my favourite distillery, Laphroaig. These notes were, of course, not taken today, but I look forward to drinking some more of it tonight—along with a couple of other things. This 21 yo was released to mark the distillery’s 200th anniversary in 2015, one of several bottles released for that commemorative purpose. One of my favourite recent official Laphroaigs was also part of that larger release: the 2015 Cairdeas. On the other hand, I was not blown away by the one-off return of the 15 yo that was also part of the group. Hopefully, this 21 yo will be more in line with the former than with the latter. Unlike those releases this was only available as a 350 ml bottle and initially only available via ballot. It didn’t sell out immediately, however: £99 for 350 ml may have seemed like a lot to people then, I suppose. And the price didn’t seem to rise very quickly on the secondary market either. I purchased it at auction a couple of years later and I believe I paid the original price. Of course, now it would be a different story: £99 would seem like a steal for an official Laphroaig 21. Anyway, let’s see if it gets my 50th birthday celebrations off to a good early start.

Laphroaig 21 (48.4%; 200th anniversary release for the Friends of Laphroaig; from my own bottle)

Nose: Ah yes, this is a much gentler incarnation of Laphroaig than the recent CS 10s—no massive peat and tar wallop (which is not to say that there’re no phenols or smoke). In the lead instead are are softer notes of vanilla mixed with florals and fruit (lime, pineapple) and ash. The fruit expands as it sits and turns muskier. With more time the phenols expand but it’s still mostly about the fruit. Water knocks the fruit back a bit and emphasizes the phenolic notes—iodine, tar, ink and quite a bit of brine (along with some kelp).

Palate: As promised by the nose but the fruit is even more pronounced here. The ash and smoke and the phenols are very much in a supporting role. A perfect drinking strength and nice texture too. The smoke expands here too with time but, as on the nose, it’s still the fruit that’s singing lead. Okay, let’s see what a drop of water does. As on the nose, it emphasizes the peat; much more medicinal now though the lime is still quite strong. With more time the fruit comes roaring back bringing some white pepper with it.

Finish: Long. More of the same (which is a very good thing). As on the nose and palate with water and time.

Comments: Yes, this is very much in line with the 2015 Cairdeas. So much so that I wonder if that had a good bit of some of this in it (unlikely, I know). Anyway, if you have a special day coming up this would be a good bottle to open (if you have one). Otherwise, just opening it should make any day special.