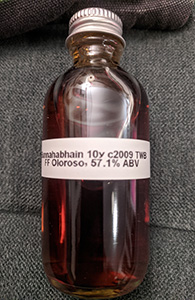 In September 2019 I reviewed a young sherry cask Bunnahabhain. That was an official release for Feis Ile 2015, matured in manzanilla sherry casks. I was not a big fan. I cared even less for the official PX finish 14 year old that I reviewed in 2018. And nor was I enamoured of the official 12 yo I reviewed in 2013, a release heavy on the sherry casks. All of that makes me a little wary of today’s whisky, a 10 yo released by the online store, the Whisky Barrel. Not only is it a young sherry cask release but the cask in question is a first-fill oloroso hogshead. Between the first-fill and the smaller cask the potential for over-oaking and sherry bombing seems high. That prospect might actually get some excited but it’s not my preferred incarnation of sherried whisky. On the other hand, I really liked the heavily sherried 12 yo Ballechin the Whisky Barrel picked in 2018 (that was a Signatory release; this is under their own name). There may be some hope there. Let’s see how it goes.

Nose: Leather, raisins, plum sauce; a leafy quality behind. On the second and third sniffs there’s more oak (not tannic) and some salt. Everything gets nicely integrated as it sits. A few drops of water bring out softer notes of vanilla and toffee.

Palate: More or less the same mix as on the nose but the salt is heavier here and there’s more of the red fruit; a savoury quality too (Marmite). Drinkable at full strength but a bit hot. More oak extract as it sits but it works well with everything else; some hints of chocolate now too. With more time the fruit gets richer and more dominant. Water pushes the oak back and pulls out some citrus.

Finish: Medium-long. More oaky bite as it goes but still not tannic. Some pepper too at the end. As on the palate with water.

Comments: Well this 10 yo from a first-fill oloroso hogshead didn’t turn out to be what I feared it might be. Big sherry character, yes, but that goes well with Bunnahabhain’s spirit as we already know from the OB releases. There’s none of the sulphur here that often shows up in the official 12 yo and there’s more fruit and very good balance. I recommend.