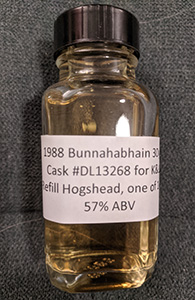 I am almost at the end of my run of reviews of K&L’s recent exclusive casks. This Bunnahabhain 30 is the oldest of them—well, the oldest I acquired a sample of, at any rate. K&L have brought in older Bunnahabhains before. I’ve previously reviewed a 25 yo and a 28 yo. The 25 yo was another Old Particular and the 28 yo was in their own Faultline series (is that still on the go?). Both were from sherry casks and I liked both a fair bit. This one, as with a number of their exclusives in this run, was matured in a refill hogshead. Let’s hope it’ll be closer to the two aforementioned in quality anyway than to the 21 yo from a hogshead they’d put out in 2013/14. That one had seemed like a very good value for the age; I purchased a bottle and was very disappointed.At $99 for a 21 yo in 2013-14, it was, in the abstract a very good value for the age—and these days $350 for a 30 yo is similarly, in the abstract, a good value for the age—but you’re not drinking the age to price ratio, you’re drinking a whisky. Let’s see what this particular one is like.

Nose: Honey, toasted oak, cereals, lemon. Very nice indeed. As it sits some more resinous notes begin to emerge: rye, pine, anise; some herbal notes too (dill, mostly). With more time it’s these notes that are in the ascendancy. A few drops of water bring back some of the softer notes but not at their initial intensity; there’s some toffee too now but still too much of the rye/pine for my taste.

Palate: Leads with the resinous/herbal notes; in fact, the softer notes that led off the nose aren’t here at all on the first sip. Hot but approachable at full strength. A little sweeter on the second sip and there’s more oaky bite too. With a bit more time there’s some bitter lemon zest. Let’s see if water opens this up. Yes, it does: the lemon uncoils and the resinous/herbal notes retreat a little. But I’m not finding the “completely unparalleled experience” promised by the K&L notes (that’s okay: they could and do say the same about the things I find).

Finish: Long. Oaky notes of cinnamon and menthol are the most pronounced. Some mildly vegetal bitterness as it goes. Water pushes the bitterness back and brings out more sweetness here. With time that sweetness becomes more chemical/artificial.

Comments: Loved the nose before the herbal/resinous notes took over, but neat, the palate and finish were dominated by those notes. Water improved both the nose and the palate but it never amounted to anything special. Drinkable enough but it’s another cask that falls in that grey area of older whiskies brought in by K&L that seem to be very good values: if you like the idea of owning a bottle of decent 30 yo whisky then $350 is a reasonable price in this market; however, if you’re interested in buying good whisky for $350 you can do a lot better and a lot more with the money.