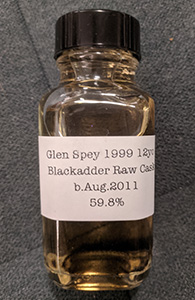 It has been almost three years since my last Glen Spey review and in fact this is only my fourth-ever Glen Spey review. Of three I’ve previously reviewed the only one I liked a lot was the 21 yo that was part of Diageo’s special release slate back when some of the whiskies in their special release slate were priced reasonably—in other words, ten years ago. The other two were solid but unremarkable. I’m hoping this one will even the balance. Let’s see if that proves to be the case.

Nose: A big fruity wave off the top (apples mostly, some pear too) along with some mild, toasted oak. Very nice indeed. Maltier as it sits and some citrus emerges to join the orchard fruit. With more time it’s fruitier still—more citrus now and some muskier notes peeping through too (pineapple). A few drops of water seem to mute things a bit—let’s see if it wakes up again with some more air.

Palate: Sweeter here but a similar mix of oak and fruit. Very approachable at full strength and a lovely oily texture. Similar development as on the nose with time, though again it’s quite a bit sweeter here. Not too much change as it sits for a longer period of time. Water brings out some more bitter oak and then a simple sweetness.

Finish: Long. The toasted oak is mixed with increasingly zesty lemon peel. The oak is more assertive with time but never out of balance. As on the palate with water.

Comments: Lovely bourbon cask whisky. Not very complex but a lovely balance of fruit, oak and malt; no flaws. Somewhat unusually for me with such a high strength whisky, I liked it better neat.