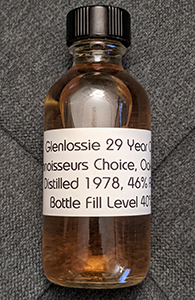 Glenlossie is the very definition of a workhorse distillery producing malt for Diageo’s blends; and in their case I don’t believe there even is a mainline blend they are closely associated with. There is no official release of their whisky as single malt, save for the occasional Flora & Fauna bottle (I am still fuzzy on the currency of that series). I have had very little Glenlossie in my time and have reviewed even less; only two others, in fact (this 10 yo and this 22 yo). Which means that this is without a doubt the oldest Glenlossie I’ve ever had (though in a few weeks it may not hold this title anymore). I said rude things about Auchentoshan last week—noting that it was one of the distilleries that seemed to give the lie to my belief that every distillery is capable of producing excellent casks—and it must be said that the few Glenlossies I’ve had have not inspired much confidence in that direction either. Will this much older iteration, distilled in the 1970s, confirm my optimism? I hope so.

Nose: Honey, candied lemon peel, malt, a bit of oaky bite. Just lovely. No major change as it sits—it all just intensifies. Let’s see what more air and time do. Yes, there’s greater sweetness now—a mix of floral and berry notes—and the oak gets more toasted. With a few drops of water the fruit gets muskier (hints of peach and pineapple).

Palate: Pretty much as promised by the nose, with the lemon ahead of the honey. Very nice texture at 46% and a perfect drinking strength. Gets a little thinner as it sits (in terms of flavour) with no real secondary fruit development. With time there are some musky hints—will water pull them out? Let’s see. Ah yes, it does but it doesn’t turn into a fruit bomb. The depth of flavour improves as well and the toasted oak pops out here as well.

Finish: Long. The lemon expands, picks up some pepper and some olive oil. As on the palate with water.

Comments: This is a very good bourbon cask whisky with really no flaws to speak of. Nonetheless, it’s lacking the fruity intensity I was hoping for—even with water added—that would take it into the next tier. More a session malt than one to contemplate—and there’s nothing wrong with that.

Thanks to Jerome for the sample!