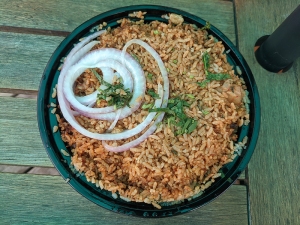 Last year I wrote up a couple of meals at Kumar’s in Apple Valley—a local outpost of Kumar’s Mess, a popular Texas-based franchise that specializes in Chettinad food (though their menu has more than just Chettinad food). That write-up from December—which included my thoughts on developments in Indian food in the Twin Cities metro that seem to have eluded the professional critics—focused on what is normally Kumar’s specialty: thali-based meals. They’ve been doing takeout through the pandemic but I doubt thalis have been involved. They are now open for socially distanced dining-in but we only stopped in on Sunday to get some takeout for another socially-distanced meal on a deck with friends. The dining room is restricted to 24 guests only, and it’s a large space, but it’s going to take me a long while to get comfortable with eating in at a restaurant—and frankly, the sight of customers going in and out without masks, as we were waiting in our car outside for curbside pickup, did not help. The food, however, was pretty good.

When we were there last winter they barely had a menu beyond the thali offerings. Now, however, there’s a full non-thali menu available. Accessing everything on it, however, can be a little confusing online. The “menus” tab on their website lists some dishes but this is not identical with the one that shows up on the “order online” tab which goes to some third party service they use for this purpose. But most everything on both menus seems to be available (I looked at both menus online but called the restaurant to order—I’m not sure what fees the third party service charges the restaurant). And I would recommend almost everything we ate.

From the starters section we got the mutton varuval (bone-in and fiddly but very good) and the chicken Chintamani—I’d never heard of this before; it turned out to be boneless chicken in a thick, dry’ish masala with lots of red chillies and it was very good. For the mains: very good pepper chicken (a Chettinad classic, available here either dry or with gravy) and very good Guntur Kodi Kura (an Andhra-style dish). We closed out the meats with a spicy Ambur chicken biryani that I quite liked; it came with a little bit of chicken salna (chicken in a spicy gravy) and raita.

At the veg end of things we got a serviceable dal and two other dishes I really liked: kathirikka vadhakkal and kaara kolambu. The former consists of eggplant roasted and then stir-fried with masala. The latter is a tangy tamarind-based gravy that you can get with eggplant or okra; we got it with okra so as to not double up on the eggplant. Mopped up with very good parottas and rice. As all of this is fairly spicy fare we got the boys tandoori chicken and naans from the small North Indian section of the menu—they liked both, though they found the tandoori chicken a bit spicier than they’re used to. We closed with gulab jamuns—which were the one major disappointment, texturally and flavour-wise.

For a look at the food etc. launch the slideshow below. Scroll down for some of my larger reservations about dining in and to see what’s coming next. 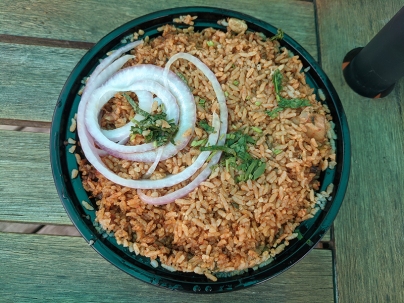 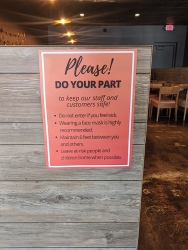 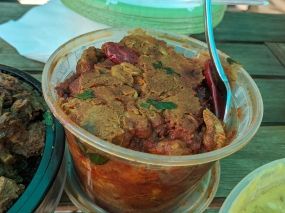 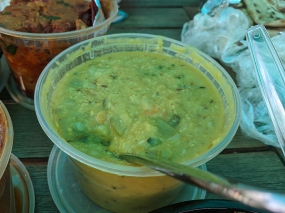 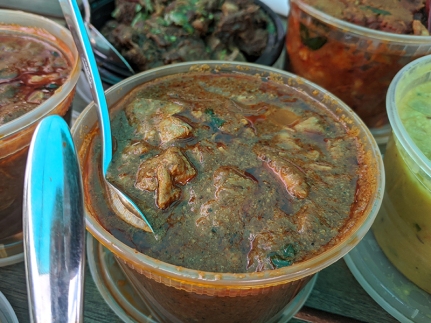 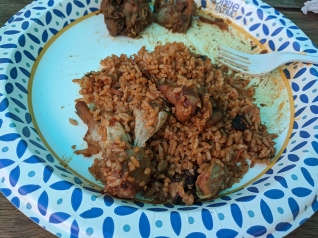 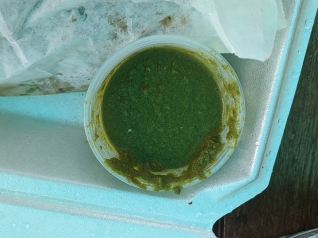 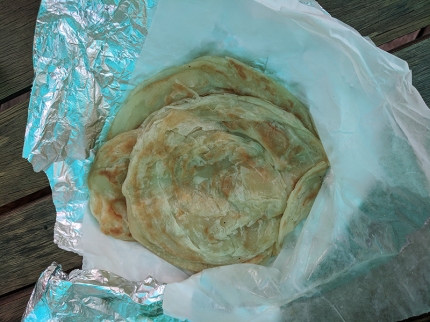 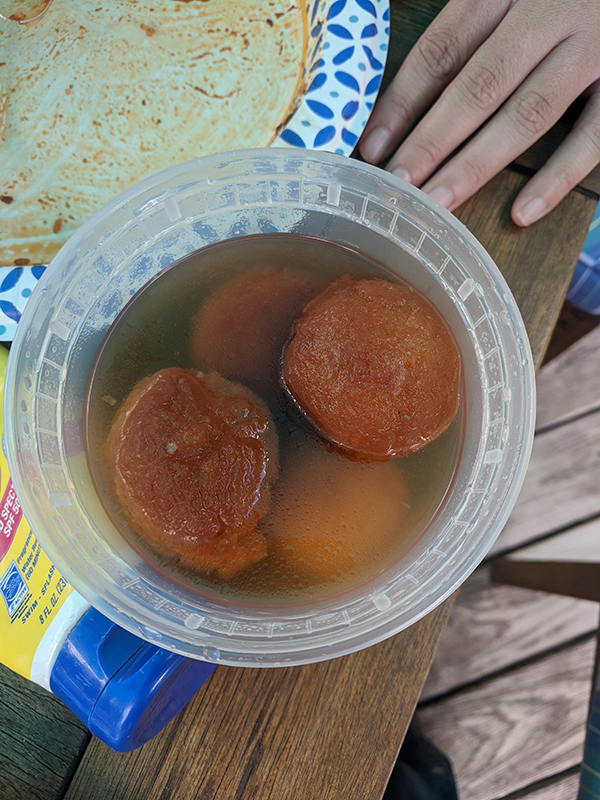 Well, here are my thoughts on the dining-in situation. I understand this is a tough call for restaurants but I think it is far too soon. Kumar’s has drastically reduced their maximum occupancy—I went in briefly because I’d failed to include a tip when ordering and paying over for the phone for curbside pickup—and tables are far apart. But very few customers entering the restaurant and standing around in the waiting area had masks on. And while they are currently only seating people by reservation there were other mask-less people as well who walked in hoping to get seated and milled around as well. They have signs encouraging mask use but I feel they need to require them everywhere except at the tables.

But I don’t have these concerns just about Kumar’s. Yes, even staying open for takeout-only can be dangerous for kitchen staff but a restaurant can come up with processes to mitigate that significantly. Opening dining rooms, however, adds more staff to the mix and also adds greater chances of infection being passed from customers to the staff. And it’s the staff I’m most concerned about, as the risk for them is greater than for any single customer: a customer may encounter only one server but each of those customers is a shared point of contact for all the staff, as servers mingle and enter the kitchen; and as plates, glasses and cutlery return to the kitchen. Risks to customers can be reduced further by restaurants that have the capacity for outdoor seating but not risks to staff—or to the larger community that staff (and diners) go back out into. I miss dining at restaurants too but I think we need to be patient. Getting takeout and tipping generously seems to me to be the reasonable compromise.

Okay, what’s next on my pandemic takeout radar? I need to get up to St. Paul soon for some shopping I can’t do locally. If that trip happens this weekend I will likely combine it with a Thai food pickup (probably from Bangkok Thai Deli). The other possibilities are more barbecue (probably Smoke in the Pit) and more Indian food—I recently noted during an Indian grocery run to TBS Mart that Kabob’s in Bloomington had re-opened for takeout (I assume they’ve not since opened to dining-in as well; I can’t imagine how social distancing could work in their tiny dining room). Let’s see how it goes.