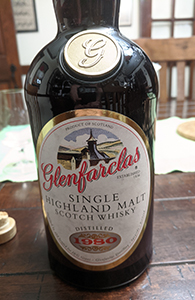 Today’s Glenfarclas is a bit older than Monday’s in terms of age and a bit more still in terms of vintage. This was distilled in 1980 and bottled from a single cask for Filliers, who—as best as I can make out—are a Belgian concern. The cask is described as a “dark sherry cask”, which I assume means it had previously held oloroso sherry. Monday’s 15 yo also featured a big sherry profile but there the bigness seemed a little “engineered” to me—driven by active oak and tannins that covered up a lot of the fruit. This seems to me to happen a lot with heavily sherried whiskies these days. I have had similar complaints about a number of other sherry casks in recent years. Glenfarclas from the 1970s, however, has reliably been a lot fruitier (such, for example, is the excellent Glenfarclas 31, 1974, which I have not reviewed yet) and I am hoping that this one too will display a lot of fruit as part of the “dark” profile. Let’s see.

Nose: Heavy sherry in the earthy, mushroomy vein with a fair bit of soy sauce and some balsamic vinegar; hints of marmite as well. On the second sniff there’s more citrus (dried orange peel, lemon). The citrus expands as it sits and the graphite shows up here as well. Water embiggens the citrus further and pulls out some malt and milky cocoa under it. A lot more apricot now too and hints of mango leather as well.

Palate: Comes in earthy but then opens up with the citrus (orange peel, lemon) and then a brief wave of something almost smoky as I swallow. Very nice texture and highly drinkable at 53%. On the second sip there’s some pencil lead and the fruit begins to show richer hints (figs). The citrus expands as it goes but the darker fruit never quite emerges. Let’s see if water brings it out. No, but as on the nose, the citrus gets much bigger and is joined by apricot; and the whole gets brighter and more intense. Some savoury gunpowder too now.

Finish: Long. The earthy notes continue here but the orange peel expands as well, joined by a touch of apricot. The citrus is emphasized with time and gets sweeter at the end; more char too now. As on the palate with water and then the mango leather from the nose shows up at the end.

Comments: This is a lovely, flawless sherry cask. Blind, I might have thought it was a Highland Park. One could maybe ask for more fruit; maybe one should not be so greedy.