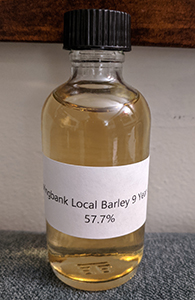 Okay, after Taiwanese and Irish whiskies and French brandy, let’s get back to Scottish single malt whisky. Here is a Springbank. This is the youngest of the whiskies released widely so far in their recent Local Barley series. I’ve so far reviewed the 16 yo (released in 2016) and the 11 yo (released in 2017). There were also a couple of 10 yo releases, I think—in 2017 and 2019—and this year a 8 yo. The 16 yo I thought was excellent and the 11 yo only a little short of that. Where will the 9 yo, released in 2018, fall? Let’s see.

Nose: Peppery and peaty to start with a mix of rubber and hot tarmac coming up from below. Salt on the second sniff and some sweetness under the rubber that I can’t quite pick. With air the familiar Springbank notes of sackcloth/burlap and cracked spices (mustard seed, coriander seed) begin to come through along with some dried mango. As it sits the sweet note expands and becomes fruitier (plum, apricot, lemon) and more honeyed. About 40 minutes in the nose is just brilliant with all of the above plus some cream. A few drops of water and there’s more brine, more cracked spices, more apricot and more cream; plus some dried orange peel.

Palate: As predicted by the nose except sans the rubber and with more palpable peat. A little hot but approachable at full strength. As it sits the peat gets a touch rubbery here as well and there’s some bitter oak extract as well. With time all of that burns away and the lemon begins to emerge here as well. The pepper and peat are more pronounced and there’s more salt too now. Okay, let’s add water. Ah yes, brine, dried orange peel, peppery peat, ash: all in perfect balance; a touch of savoury gunpowder too.

Finish: Long. The peat turns ashy here as all the other stuff bar the salt and pepper fades out. Develops as on the palate. As on the palate with water but the brine and dried orange peel are on top.

Comments: It didn’t wow me right out of the sample bottle but boy, did it come along with time. The nose is a marvel, the palate more austere. All in all, this is as good as you could hope for a 9 yo whisky to be. Wish I’d bought a bottle.