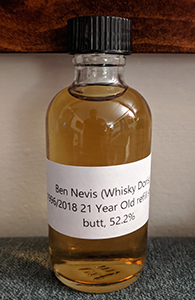 I reviewed three 20+ yo Ben Nevis last month, all from Signatory, all distilled in 1991 and all from sherry butts. I found the 22 yo and the 24 yo from the trio to be excellent and the 26 yo to be merely very, very good. None of them exhibited sherry bomb character, allowing the distillery’s unique funky mix of fruit and malt and mineral notes to come through front and center. Today I have another 20+ yo Ben Nevis from a sherry butt (this time specified as a refill sherry butt). This was bottled not by Signatory but by the German outfit, Whisky Doris—though for all I know, Signatory may be the source of their casks. This one is from 1996, another year from which a number of casks have been bottled. In addition to the official 1996-2012 I’ve reviewed a number of indies as well: an 18 yo from Liquid Treasures; a couple from Cadenhead (this 19 yo and this 17 yo); and another 18 yo from Whisky Import Nederland. Indeed, my very first Ben Nevis review was of a 9 yo, 1996 bottled by Duncan Taylor under their Whisky Galore label. All of them—whether from bourbon or sherry casks—have ranged from very good to excellent; and all have been anything but cookie cutter whiskies. Let’s hope this one doesn’t let the side down.

Nose: Big mineral notes to start along with that old-timey medicine bottle rubber gasket note. This is clearly not very sherry-forward either. On the second sniff there’s some grapefruit and some smouldering leaves along with hints of muskier fruit. Let’s see how it develops as it gets some air. Well, the rubbery note recedes a fair bit with time and it gets malty/yeasty here as well. The yeasty funk rises to the top with a few drops of water and those smoudering leaves get more talkative as well.

Palate: Sweeter here but it’s in the same general ballpark as the nose but with salted walnuts, malt and some yeasty/bready notes added on. Very approachable at full strength. Stays in this vein as it sits. With a lot more time and air the citrus expands (a mix of grapefruit and makrut lime peel) and there’s some white pepper. Okay, let’s add some water. Less bread/yeast and more citrus and pepper with water and the peppery bite is joined by some ginger.

Finish: Long. Gets maltier and breadier as it goes with the lime peel popping out again at the end along with salt crystals. The salt expands with each sip. As on the palate with water; not quite as salty now either—in fact the salt backs almost all the way off.

Comments: More austere than that Signatory trio from last month but very good in its own right. The sherry notes again are muted (the nuts and the salt seem to be the major evidence). Like all the others, this is very Ben Nevis indeed—though I would have enjoyed more fruit. I liked it better with water.