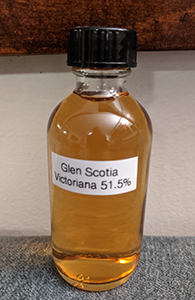 Now that I am a whisky blogger who only reviews official releases here’s one from Campbeltown. The Victoriana is a NAS release that was added to the revamped Glen Scotia lineup (which revamp, I can’t remember) in 2015. That it’s an official NAS release is no surprise: pretty much every distillery had at least one NAS release by 2015. However, it’s unusual in that it’s bottled at a relatively high strength, Also somewhat unusual is the manner in which it is put together: after initial ex-bourbon maturing 30% of the eventual vatting goes into first-fill PX casks and the rest goes into heavily charred American oak. Wouldn’t it just be easier to make a 12 yo ex-bourbon whisky from refill casks? I know, I’m a very simple man. But however it’s made, is this any good? I know I didn’t care at all for Glen Scotia’s other NAS core release, the Double Cask. At the time I said “I wouldn’t buy it for $20 leave alone the $75+ being asked for it in Minnesota”. Well, the Victoriana is currently $90+. Let’s see what it’s like.

Nose: Tart apple, yeast, slightly musky notes of lemon. More fruit as it sits and it’s a bit sweeter (pineapple, hard orange candy). Just a bit of char running through it all. The fruit intensifies nicely as it continues to sit. With a few drops of water the fruit gets mixed with cream and the whole gets softer.

Palate: Comes in sweet here and then there’s oak behind it—not tannic or overbearing though. Very approachable at full strength. Gets a bit more grainy and metallic as it sits. With time the fruit expands here as well but it’s all a bit indistinct. Water makes it sweeter still but the grainy note expands as well. The char is all but gone.

Finish: Long. The oak starts to get bitter here and, on the whole, there is nothing very interesting developing here. More of the same here with water at first and then it gets a bit spicer.

Comments: I quite liked the nose of this whisky but it didn’t do very much for me on the palate and the finish I did not care for at all. Still it wasn’t the oak bomb I was afraid it would be. I would not turn down a pour if someone else were buying but I don’t need a bottle.