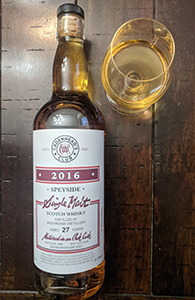 Here to close out sherry cask week and the month on the blog is a 27 yo Auchroisk bottled by Cadenhead in 2016. It is somewhat atypically—based on my experience anyway—a sherry cask. Bourbon cask Auchroisk can be wonderfully fruity and I’ve been intrigued by the distillery ever since I drank this fruit bomb bottled for Binny’s by Signatory some years ago (and which I probably gave too low a score then). Most of the other Auchroisks I’ve had have been bourbon casks as well (for example, this, this and this—the last of those another 27 yo from Cadenhead). But I don’t mean to suggest that I’ve not had any sherry cask Auchroisks before; just last year I reviewed another, a 22, 1990 bottled by Whisky-Fässle. I liked that one a lot and particularly liked that the sherry in that case was not very obtrusive and certainly did not cover up the fruit. I’m a little less sure of this one—the reviews on Whiskybase suggest it may be one best aligned with the tastes of the German market, with more than one reviewer noting the presence of “dirty sherry”, which is another way of saying sulphur. Well, as it happens I don’t mind sulphur when it presents in the savoury gunpowder end of things. But I do hope that it won’t block the fruit. Let’s see how it goes.

Nose: A big dose of lemon shot through with leafy, “dirty” sherry notes (struck matches; gunpowder). The leaves pick up quite a smoulder as it sits and there’s some pineapple mixed in with the lemon. With more time the fruit begins to come out to the front. A few drops of water wake the “dirty” notes back up but the fruit is stronger now too; and there’s quite a bit of salt here too now.

Palate: As on the nose at first but there’s more of the fruit as I swallow. Some sherry separation as it heads to the finish. Between the acid, the gunpowder and the abv it has a strong bite but is generally approachable at full strength. With time it’s saltier and the fruit gets a bit more pronounced. But the “dirty” sherry still covers it up more than I would like—there’s more pineapple and some tart mango fighting to get out.  Let’s see if more time or water release them. Yes, with a lot more air the sherry lets the fruit out and the whole is richer now. Okay, let’s see what water does. Yes, more in this vein as the fruit gets richer and the “dirty” notes recede a bit.

Comments: Well, I think it is safe to say that this is not a sherried whisky for the sulphur-averse. There’s quite a bit of sulphur here of the gunpowder variety and it takes some patience, air and water for the fruit to fully emerge. My first pours from the bottle were even stronger on the “dirty” sherry notes and now I’m curious to see if they’ll subside further as the bottle gets to and then past the halfway mark. Personally, I’d prefer more direct access to the fruit but this is an interesting if challenging whisky as it is—it gets a point bump for that.