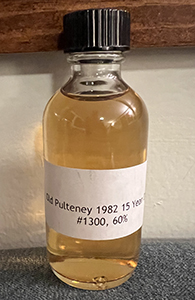 For the last whisky review of January I have an official Pulteney—and so, an Old Pulteney—distilled in 1982 and bottled in 1998. Pulteney released a number of these 15 yo casks in the late 1990s, seemingly to mark the oncoming end/start of the millennium. I say “seemingly” because I remain a bit confused as to why they would release in 1997/1998 casks aimed to commemorate something happening 2 years later. Then again I have never claimed to understand whisky marketing. The release I am reviewing today is from cask 1300, a sherry cask which was, I believe, released in the Japanese market. Not all of these casks seem to have been ex-sherry; but, assuming Whiskybase’s listing is complete, all seem to have been bottled at very high strengths. This one certainly was at 60%. As to whether this too was a conscious choice for this series or if 15 yo Pulteney consistently flows out of the cask at 60% up there in the cold weather of Wick, I don’t know. Anyway, let’s see what this is like.

Nose: Pretty closed at first (no surprise) and then there’s a slightly acrid, leafy note. Musty, damp notes emerge on the second sniff—like going into a wet concrete basement—and the leaves turn to moss. Some tart apple behind it all. As it sits the mustiness recedes, some nutty notes emerge and the fruit expands—some zesty lemon joining the apple; a floral sweetness too now. With more time and air still the damp/musty notes are all but gone and the fruit is to the fore. A squirt of water and the fruit is really emphasized—plum sauce too now along with the apricot—and some toasted oak emerges to join it.

Palate: No mustiness here—instead the lemon is joined by sweeter notes (brown sugar and pineapple jam) and it’s all quite concentrated. Remarkably approachable for the high abv and the texture is rich. The nutty/beany thing from the finish pops up earlier with time. Some apricot too now. Okay, let’s see what water does for it. It expands the apricot and pulls out some polished oak and some honeycomb and wax. With a bit more time the plum sauce emerges here too.

Finish: Long. The fruit reaches a sharp crescendo (the alcohol may have something to do with the sharpness) and then fades into a beany/nutty note; the final impression is saline. Water softens the finish—the sharp fruit is replaced by the apricot and then it develops as on the palate.

Comments: I have to admit my expectations were not very high after the first couple of sniffs. But then it came on very strong indeed with time and air and then even more so with water. One to drink slowly with judicious additions of water—if you have an unopened bottle, that is. I don’t know how Pulteney this is but it is very good.