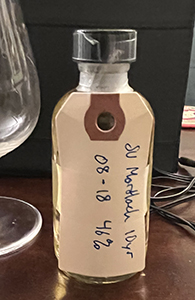 Friday’s Mortlach, an official release for travel retail, didn’t impress very much. As I have some readers who are not very familiar with Mortlach I feel I must try to not leave them with a ho-hum impression of the distillery. Accordingly, I’m following that review with a full slate of Mortlach reviews this week. I’ve not tasted any of these bottles before but am hopeful that at least one of them will give a better idea of what Mortlach whisky’s appeal can be than that Alexander’s Way did. First up, is a 10 yo bottled by Signatory in its Un-Chillfiltered Collection series for Spec’s in Texas. As per Whiskybase a number of these 10 yos from 2008 were bottled by Signatory for stores in the EU as well, all matured in bourbon barrels just as this one was. Indeed, this one is a vatting of four bourbon barrels for a total release of 964 bottles. I believe barrels generally yield a little over 200 bottles. Dilution down to 46% brings the number up. I’ve always had a soft spot for Signatory’s UCF collection—when I first started out buying indie releases this was one of the lines I bought a lot of bottles from. It used to be pretty ubiquitous in the US and pretty reasonably priced. As to whether this Mortlach was reasonably priced on release in 2018, I don’t know—but I do hope it’s a good one.

Nose: A mix of citrus (lemon peel) and dusty oak off the top. On the second sniff some tart-sweet apple begins to emerge. The berries from the finish emerge here with time along with a fair bit of cream. A few drops of water and the lemon peel turns to citronella.

Palate: Comes in with the apple and oak. Decent bite and texture at 46% abv. On the second sip there’s some of the citrus and some peppery bite joins the oak. The citrus picks up as it sits. With time the balance of citrus, oak and pepper becomes very pleasant indeed. Okay, let’s add a bit of water. Ah yes, cream emerges here as well, mixing with the citrus and picking up some sweet pie crust as it heads to the finish.

Finish: Long. The dusty oak is joined by a mild berry sweetness and then the pepper pops out here as well. Cream here too with time, edging into very milky cocoa. A leafy note too at the very end. As on the palate with water.

Comments: This started out fairly anonymous but time and then water were very good to it. Even with time and water it’s nothing that will set your pulse racing but it becomes a solid session malt.