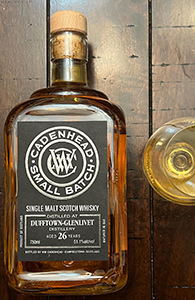 As the last review for May was of a 20+ yo Speyside malt, I might as well begin June with a review of another 20+ yo Speyside malt. This one too is from an unglamorous distillery, Dufftown and at 26 years of age is easily the oldest Dufftown I’ve yet tried. It’s not a recent release, having been distilled in 1988 (not 1987 as I mistakenly listed it as in my “Coming Soon” post) and bottled in 2015 by Cadenhead. I don’t know if it took a while after that to finally make it to the US or if I just didn’t notice it before because that’s roughly when I started paying less and less attention to whisky release news. Anyway, I noticed it in a local liquor store a month or so ago, along with a few other interesting-looking bottles, and managed to convince some friends to go in on splits of all of them with me. I kept 9 ounces of each bottle and they took the rest between them. This is the oldest of the three and in some ways the one I’m most intrigued to try. Though it’s in Cadenhead’s squat bottled “Small Batch” series, I suspect it’s from a single cask as the cask type is a bourbon hogshead and the outturn 228 bottles—which is more or less what you’d expect from a single hogshead of this strength at this age.

Nose: A lovely blend of honey, ripe apples and toasted oak to start. On the second sniff there’s some waxed lemon peel and some muskier fruit begins to peep out from behind the first wave: pineapple, tart-sweet mango, a bit of apricot. With time it gets maltier and the fruit gets baked on top of pastry. With a few drops of water the musky fruit expands and gets sweeter

Palate: Leads with the oak here and then the citrus pops out; gets spicy heading to the finish. Nice texture and a bit more bite than the abv would suggest—probably on account of the oak. The richer fruit is more palpable on the second sip but not as much as on the palate. Let’s see if air and water coax it out. With time there’s more citrus and some of the pineapple pops out as well along with some sweeter notes (peach?). it doesn’t turn into a fruit bomb though—the oak is still the dominant note. Okay, let’s add water. It pushes the oak back a bit and pulls out more of the citrus (lemon bars mixed in with some bitter peel).

Finish: Long. The oak spice is the dominant note here but it’s not tannic in the slightest. The citrus emerges again to join it. Develops as on the palate with air and water.

Comments: This is very good bourbon cask whisky. Just a bit too much of the oak on the palate and finish but even for an oak-phobe like me it never gets too much. Still, a little less oak and a little more fruit and it would have been headed for the next tier. Who knows maybe it’ll show up on the next few pours. The bottle’s below the 1/3 full mark now that the splits have been done but it hasn’t been open very long. I’ll report on any meaningful changes.