As I’ve said before, when we first arrived in Minnesota 15 years ago, Los Ocampo’s outposts—first at their counter in the Midtown Global Market and then at Taqueria Los Ocampo across the street on Lake St.—were among our Mexican mainstays. We also ate occasionally at the Taqueria Los Ocampo location on Arcade St. in St. Paul. All of these locations are casual, counter-service places. Somehow, however, we never ended up visiting their more formal restaurant and bar which opened on Suburban Ave. in St. Paul in 2011 (they’ve since opened another sit-down restaurant on University Ave. in St. Paul). That finally changed this past weekend when we descended on the Suburban Ave. location with a couple of friends we dine out with often. Here is what we found.

I knew that the Suburban location was a far glitzier setup than the Taqueria incarnations of the brand. I was not prepared, however, for just how large it is. There’s one expansive dining area alongside a large bar; another adjacent dining room that features booth seating; and a large patio in addition. Even though it was a slightly chilly Saturday morning, we decided to take a table on the patio.

While the restaurant incarnation of Los Ocampo is obviously much larger and more formal (relatively speaking) than the counter service taqueria locations, the heart of the menu is not actually very different. By the heart of the menu I mean their selection of tacos and masa-based dishes. For these you have the same selection of meats and vegetarian options on the menu here as you do at their taquerias. There are other things here, however, that aren’t on those menus: ceviches, salads, sandwiches and so forth. We were, however, there for a taco and masa fix and that is what we focused on. That is after we started proceedings with some chips, salsa and guacamole.

The older boy got two tacos: one with his new favourite al pastor (which he enjoyed greatly at Orale earlier in the summer) and one with cecina. He got his tacos with the toppings on the side and enjoyed both a lot—especially the pastor. The younger boy got two tacos as well: one with carnitas and one with tinga de polllo. Well, we didn’t actually order the tinga de pollo; he was supposed to be getting one with their mild shredded chicken but the tinga de pollo is what came out. Even though it was a lot spicier he loved it. The missus got a huarache with lengua and rice and beans on the side. Both the masa cake and the lengua were excellent. I will note here, however, that we were disappointed to see that neither the restaurant nor the taquerias feature what used to be one of our favourite Los Ocampo dishes: the huarache with pork rib.

To end we shared an order of their churros, which were excellent, and their flan Napolitano. This latter was also very good and quite a lot better—to our taste—than the far denser versions we ate at El Burrito Mercado and Andale last year.

For a look at the restaurant and everything we ate, launch the slideshow below. Scroll down to see how much it all cost and to see what’s coming next. 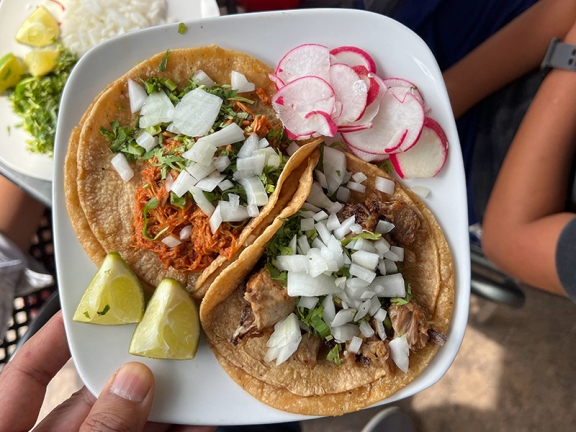 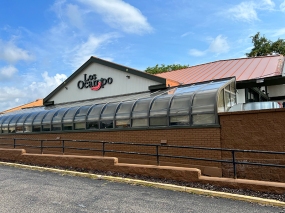 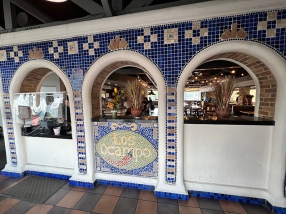 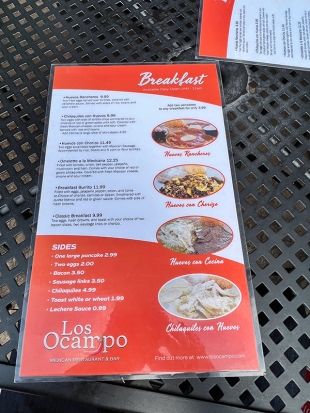 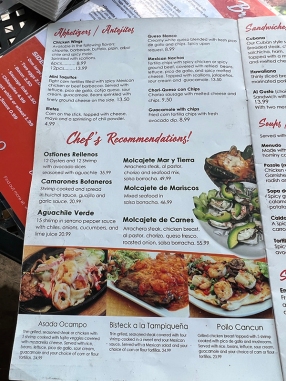 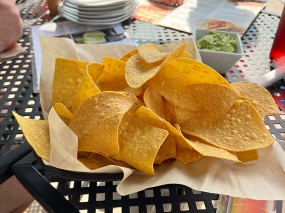 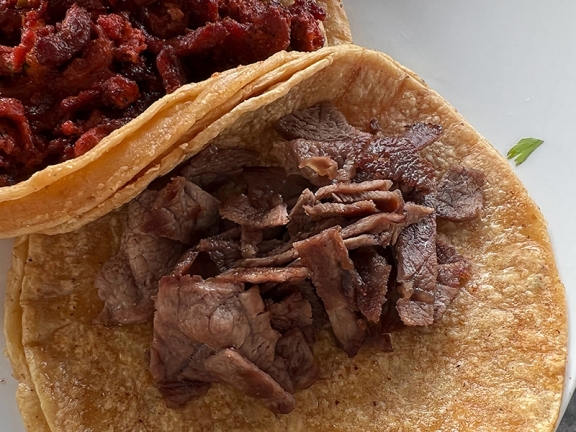 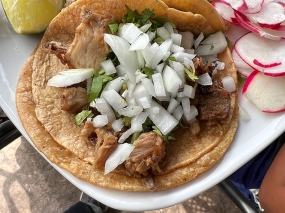 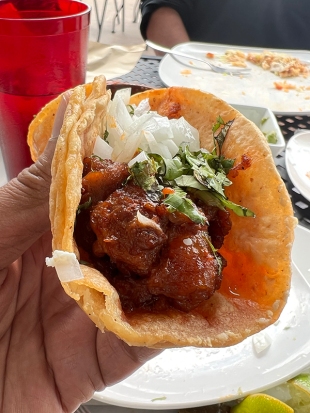 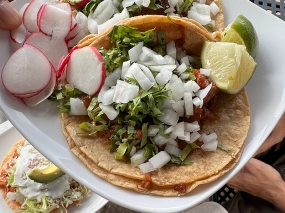 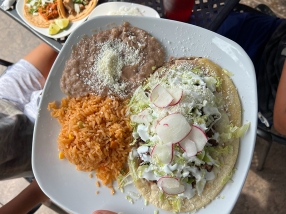 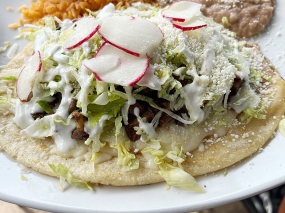 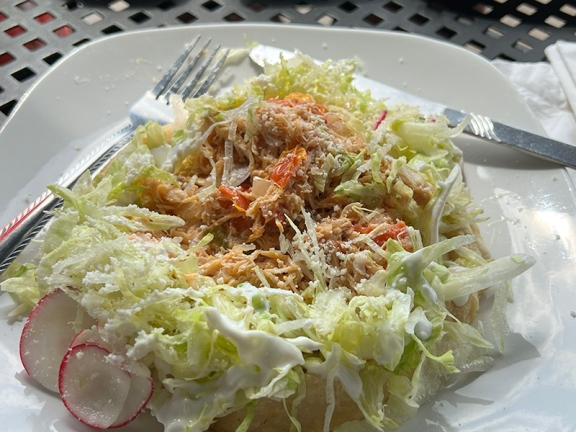 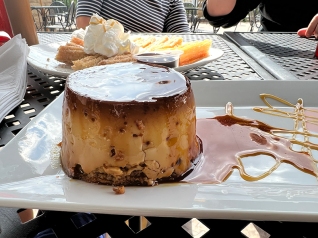 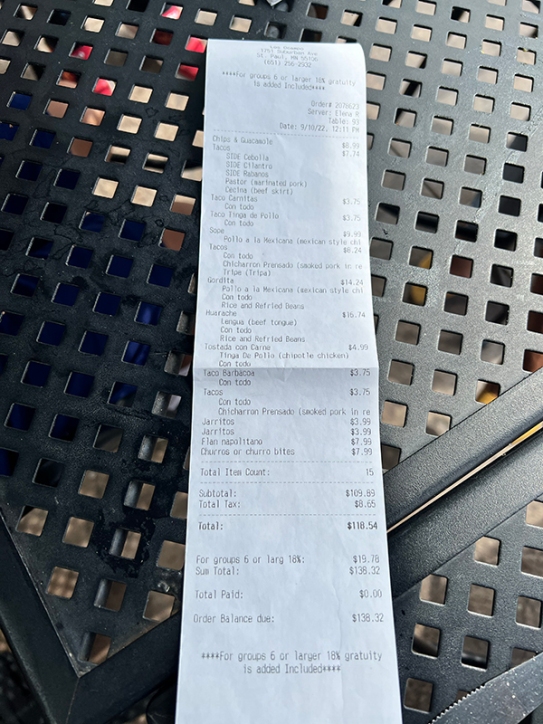 With tax and included 18% tip (included for parties of 6 or higher) the total came to just over $138. I should note here that due to higher prices on beef they are currently charging higher prices for dishes incorporating beef (and particularly for variety meats such as tripe and tongue). Still, for the quality and quantity this seemed like a pretty decent value. Service was friendly and attentive to our needs—even though we were the only people seated on the patio. I will note, however, that there were a couple of ordering flubs—the younger boy’s taco topping swap (though this worked out well) and the non-appearance of beans and rice alongside one of our friends’ tostada (we were not charged for it).

A nice meal, on the whole, though it did also make us want to go back to Homi, which we have not visited in a while. And I also note that in my review of Taqueria Los Ocampo in 2016 I’d said that I needed to review more of the Lake St. Mexican stalwarts but I never ended up doing that. Goals.

Okay, what’s next from the Twin Cities. Probably Italian dinner out with our boys in Minneapolis. If those plans hold I’ll have a review of Terzo next week. Plus the first of my Ireland reports and another Kauai report—those should show up on the weekend.