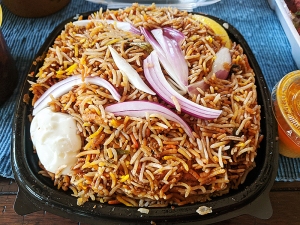 My survey of the new wave of Indian restaurants in the Twin Cities continues. Next up, the Plymouth location of yet another US franchise that has come to the Twin Cities suburbs in the last few years: Hyderabad House. Well, I guess their full name is Nawabi Hyderabad House Biryani Place but that’s a bit of a mouthful and “Hyderabad House” is how they answer the phone. They have actually been around in the area longer than both Godavari—which opened this September in Eden Prairie—and Kumar’s—which opened last October in Apple Valley. Hyderabad House first opened in early 2018 in Minnetonka and then in late 2019 they opened this second branch in Plymouth. That should give you a sense of the likely presence of the intended desi market in the general area, given that the two locations are just about 10 minutes drive from each other. The first wave of the pandemic resulted in both locations closing at the end of March and then in May only the Plymouth location opened back up, first to take-out, then to dine-in and now back to take-out only. As to whether the Minnetonka location will reopen, I don’t know but I’m hoping it will as we quite liked the food we picked up from the Plymouth location last weekend and the other location is 10 minutes closer to us. END_OF_DOCUMENT_TOKEN_TO_BE_REPLACED

In my review of meals at Kumar’s last fall, I noted the huge blind spot in the mainstream (read: white) press when it comes to coverage or indeed awareness of the Indian food scene in the Twin Cities metro. Their focus remains on places in the Twin Cities proper: North Indian curry houses and the occasional upscale place with a p.r push. Meanwhile the real action, along with most of the region’s growing South Asian population, is in the suburbs. The opening of the local franchise of Kumar’s in Apple Valley—at the top of the Cedar Avenue corridor that is being filled in with new residential developments seemingly every month—was one (more) sign of this. Here now is another: a local franchise of Godavari which opened in Eden Prairie just about a month ago, pandemic be damned. We picked up a large amount of food from them last weekend and ate it on our deck with some friends. Here’s what we thought of it. END_OF_DOCUMENT_TOKEN_TO_BE_REPLACED 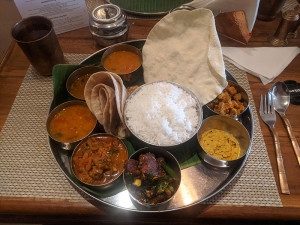 From the North East to the south and to a restaurant I first ate at on my trip to Delhi in December 2018. Bagundi, located in M block on the Connaught Place outer circle, features the food of Andhra Pradesh. The state in fact split into two in 2014, or rather a new state, Telangana was carved out of the north-western parts of the old Andhra Pradesh. As far as I can make out, Bagundi’s conception of Andhra food is not affecting by these border re-drawings: their menu features most of the dishes I would have expected to see on an Andhra menu prior to 2014.
END_OF_DOCUMENT_TOKEN_TO_BE_REPLACED 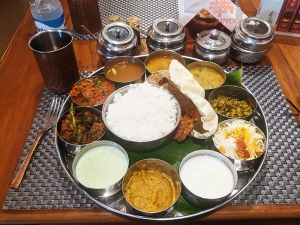 From Bombay to Delhi; from one city with horrendous traffic to another. But how do the food scenes compare? Bombay’ites will be appalled to even find this question being posed but it’s a fair one. It’s true that Bombay has southwestern coastal food of a quality that has never been available in Delhi as well as far better Gujarati and Parsi food, and it probably has better western-ized restaurants. But is that enough? My friend Paromita, with whom I ate out in Bombay a lot, holds some heretical views on the subject. She says that Delhi may in fact be a more cosmopolitan city than Bombay—Bombay-ites will register a claim like this as might New Yorkers being told that Los Angeles is a more cosmopolitan city than New York. But certainly, a seemingly non-intuitive case could be made for this on the food front. END_OF_DOCUMENT_TOKEN_TO_BE_REPLACED

Once upon a time in Delhi, restaurants at five star hotels were pretty much the only option if you wanted to go out for a fancy meal. The pre-eminent restaurants in the category were the Maurya Sheraton’s Bukhara and Dum Pukht, and through the late 1980s and 1990s they set the tone for similar restaurants at the other five stars: meat-centric North Indian food with either a Northwest frontier or nawabi focus. The hotels usually also all had Indian Chinese restaurants (each of which pretended to be “authentic” Chinese) and 24-hour coffee shops, and some had one outlier restaurant: the Meridien had a French restaurant, for example, (Pierre, I think its name was—for all I know, it still exists.) and the Oberoi had an excellent Thai restaurant for a while: Baan Thai.  END_OF_DOCUMENT_TOKEN_TO_BE_REPLACED