I am tempted to name this recipe “Better Than Butter Chicken” in a shameless attempt to go viral. This would be generically appropriate—it too is a creamy chicken curry involving tomatoes and dairy. It would also be accurate—it is better than butter chicken. Big talk? In a world that identifies Indian food with butter chicken, yes. But make it and apologize for doubting me.

As I noted on Twitter a few days ago, this was the first dish I learned to make really well when I started cooking in earnest in the early-mid 1990s after starting graduate school in the US. The original dish is a chicken curry that was part of my mother’s dinner party repertoire. She’d packed me off to the US with a collection of hand-written recipes and sent me many more over the years but this was never one of them. I recreated the first versions of this from memory before finally arriving at the broad contours within which it now resides. By which I mean that home cooking is never exact or nailed down. Recipes, when written down, seem more fixed than they usually are in practice but there’s always at least a bit of variation when you make dishes over and over again. My own version of this curry is now different from both my first iterations in the 1990s and from my mother’s but it’s very much in the same family (in fact, when she visits she always asks me to make it for her and my father). I encourage you to add your own twists to it after first trying it as outlined below. END_OF_DOCUMENT_TOKEN_TO_BE_REPLACED 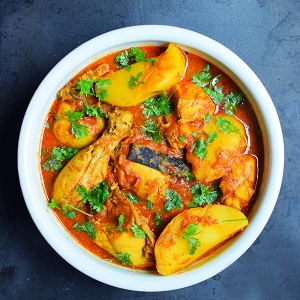 “Red curry chicken” is my children’s name for the chicken curry that has been my gateway to slowly Indianizing their palates for the last few years. It is one of their absolute favourites of all the things I cook for them (though Marcella Hazan’s pesto is in unassailable first place). The “it” however is not a stable referent. By which I mean that this is a recipe that has been subtly, progressively tweaked to bring them along into an appreciation of spicy/spicier food without their quite realizing it’s been happening. Please note that when I say “spicy/spicier” I am not referring to capsaicin heat but to a fuller flavour via the use of a greater body of spices: cumin, coriander seed, fennel seed, cinnamon, black pepper, cardamom etc. And, yes, also increasing amounts of red chilli powder. That said, though they eat hotter food than most of their Minnesotan peers, the current iteration of this curry is not very hot either. But over the last four or five years it’s gone from being a fairly bland chicken stew with tomatoes to becoming something that the missus and I enjoy eating alongside them. Here is the current iteration for your enjoyment as well. END_OF_DOCUMENT_TOKEN_TO_BE_REPLACED

I made a somewhat involved chicken curry for a dinner party last week. Made in a Hyderabadi style it involved roasting and then making a paste of sesame and peanuts and various spices. It turned out very well and as we were eating I began to think of a simpler version I could make for more everyday cooking and which might be a little more kid-friendly. This recipe was the result of that thinking. It sits somewhere between that more complex Hyderabadi prep and a “white” chicken prep that one of my aunts is famous for (and which I’ve hybridized before). It involves very few ingredients and only whole spices. And if you have a good not-too chunky peanut butter at hand you’re well past the starting line. Give it a go. It’s very tasty and goes well with rice or parathas—or for that matter you could sop it up with dinner rolls.  END_OF_DOCUMENT_TOKEN_TO_BE_REPLACED

A while ago I posted a recipe for a “hybrid” chicken curry that I more or less improvised. Today I have a recipe for the basic chicken curry that is eaten in homes all across north India. I don’t mean to suggest that there is (only) one identical chicken curry eaten in homes all across north India, only that these curries (and this one) are members of the same closely related family, with a bit of ingredient variation in different regions, and proportions of spices (or even the exact ones used) varying in homes. But basically this is a familiar template for most north Indian home cooks: you heat up oil, add some whole garam masala to give it fragrance; saute onions and then ginger-garlic paste; then add ground spices; then add the meat; then a souring agent (tomatoes, usually); then water; cover and cook till done; serve with rice or parathasa/chapatis. And that is what I am doing here.