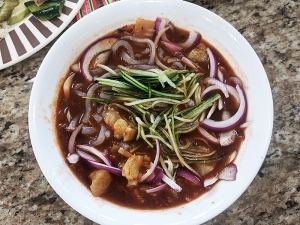 After several weeks (months?) of saying we would soon be going back to Peninsula in Minneapolis to pick up some Malaysian food we finally did it this past weekend. Peninsula remains the major Malaysian restaurant in the Twin Cities metro. Indeed, I’m not aware of any other contender—which is not to say one might not exist. There is, of course Satay 2 Go in Apple Valley but it’s much smaller, in terms of both size and scope; and in any case we’ve always enjoyed Peninsula more. As I’ve noted before of Peninsula, they have an expansive menu but not everything on it is entirely to our taste. Over the years we have come to focus our meals there on a small subset of their Malay specialties. And on this occasion as well we stuck largely to our favourites. Some of them survived the 50 minute drive from the restaurant to our house a little worse than others but we had an enjoyable dinner anyway. END_OF_DOCUMENT_TOKEN_TO_BE_REPLACED 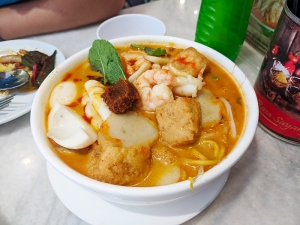 I have been mocked cruelly on at least one food forum for posting meal reviews eight months after the fact. Well, not only does this review come eight months after the meal was eaten, I have seen fit to post it despite the fact that it only involved three dishes. I am not ashamed. We first ate at Rasa Sayang—one of the two Malaysian restaurants in London’s Chinatown (C&R is the other)—on our extended stay in London in the spring of 2017 (here is my first review). We’d planned to go back again before we left but when we did we found that it was closed for renovations. On that occasion we went to the nearby Baiwei instead and had a very good Sichuan lunch, but we still came back to Minnesota with a laksa-shaped hole in our hearts that the version at Peninsula in Minneapolis couldn’t quite plug. Accordingly, on our trip this past June we stopped in for a quick meal before park, museum and theatre action. I am glad to report that the changes in the restaurant’s look have not affected the quality of the food and nor have the prices gone up. END_OF_DOCUMENT_TOKEN_TO_BE_REPLACED 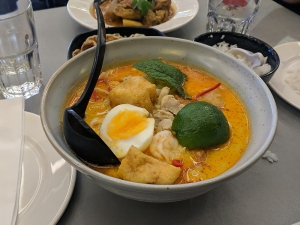 There are many things that make living in London superior to living in Minnesota—better theatre, museums full of colonial loot, amazing parks, great cheese, proper public transportation, the lack of polar vortexes (and 18 months of winter more generally) etc. etc.. It should be said though that while the food scene is generally far superior it is not consistently so: the Twin Cities metro has better Mexican and Thai food and our Sichuan is not far behind either. However, when it comes to Malaysian food, London is in a different league; to be fair it’s far ahead of any city in the US in that regard.

In one of my reviews from 2017 I noted why this should be so: the Malaysian diasporic population in the UK is far larger than that of the US and is concentrated in a much smaller area. As with South Asian cuisines and populations, these disparities—of demographics and food quality—have to do with colonialism. You can basically tell which first world countries (neo)-colonized which third world countries by looking to see which immigrant cuisines are the best there. As unfortunate as the historical reasons are, it does mean that London has very good Malaysian food compared to anywhere in the US, and as we love Malaysian food and get very few opportunities to enjoy it here we eat it in London every chance we get.  END_OF_DOCUMENT_TOKEN_TO_BE_REPLACED 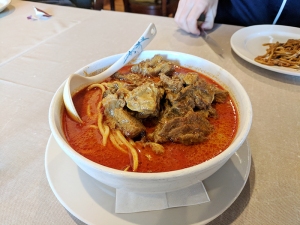 I recently re-reviewed Homi two years after my first report. Next week I’ll have a return visit to a Thai restaurant in St. Paul that I first reviewed last year. In between those here is a second review of a restaurant in Minneapolis that I first reviewed four years ago. Peninsula remains the pre-eminent Malaysian restaurant in the Twin Cities metro area—though it must be admitted that that is not saying very much. Of the two other Malaysian places we’ve been to here, one is just about passable (Satay 2 Go in Apple Valley) and our meal at the other was atrocious (Singapore in south Minneapolis, now closed). As far as I know, there are no others; please correct me below if this is incorrect. Anyway, Peninsula, I am glad to report, remains pretty consistently what they were four and even ten years ago and if you navigate their menu carefully it is very possible to eat a good meal.  END_OF_DOCUMENT_TOKEN_TO_BE_REPLACED 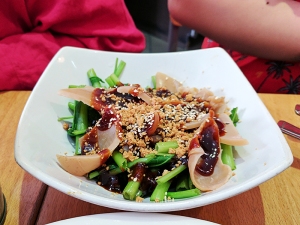 I have already posted a write-up of the number of meals we ate at C&R, a Malaysian restaurant in London’s Chinatown. Because we came to C&R so early during our stay, and liked it so much, we sort of got stuck into it for our Malaysian cravings. As a result we didn’t make it to Rasa Sayang—the other Malaysian place likely to be recommended to you by Londoners if you ask—until much later. This was a shame as we really liked our meal there; in fact, we preferred their versions of a number of things that we ate at both places.

Here now is an account of a meal we ate there in mid-May with old friends who live in the Los Angeles area but who we hadn’t seen in more than a decade. I stopped in separately on another occasion with a group but did not have my camera with me and my phone’s battery was dead. Alas, when we tried to go back in early June, right before we left for Scotland, we found that they were closed till the middle of  the month for renovations.  END_OF_DOCUMENT_TOKEN_TO_BE_REPLACED 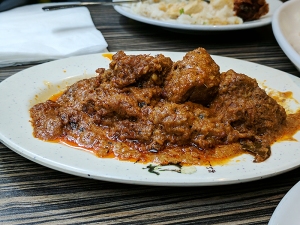 Dim sum (traditional or modernist) is not the only non-Indian/South Asian food we’ve been eating in London—though it may be hard to tell this from the reviews I’ve posted so far. In fact, the restaurant we’ve eaten at most often is neither Indian nor Chinese (though it is located in Chinatown): it is C&R, a Malaysian restaurant located on Rupert Court, a comically narrow alley that connects Wardour Street (one of the principal Chinatown roads) with Rupert Street, which is in the borderlands between Chinatown and Soho. We’ve eaten there four times in the last two months. Malaysian food is sort of the sweet spot for us as a family: take Indian, Thai and Chinese flavours and ingredients and put them in a blender and Malaysian food is what will come out. And it offers a number of things our boys happily scarf up: between the satays, the Hainanese chicken rice, the parathas, and various noodle soups, I’m not sure there’s any cuisine we like to eat that’s easier to go out to with them than Malaysian.  END_OF_DOCUMENT_TOKEN_TO_BE_REPLACED 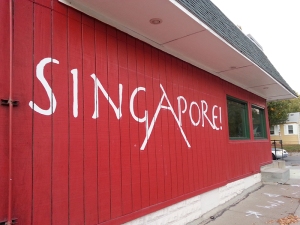 This is the story of a crushing disappointment.

We love Malaysian food, and since in the US there are not that many opportunities to eat it we take each one we get. In the Twin Cities metro area our options, as we knew them, were Peninsula, where pretty decent iterations of some iconic dishes can be found, and Satay 2 Go, which is a bit spottier but still plausible. Thus I was very intrigued when there was mention on Chowhound earlier this year of a place called Singapore re-opening in south Minneapolis. Conversation about it indicated that it had been well-respected when it was previously open but details were hard to come by. Then a few weeks ago someone else posted, noting that they had just been, that it was the same ownership/chef as previous and that it was still good. We resolved to go and this past weekend we did. And it was very, very, very, very, very bad; possibly worse.

END_OF_DOCUMENT_TOKEN_TO_BE_REPLACED 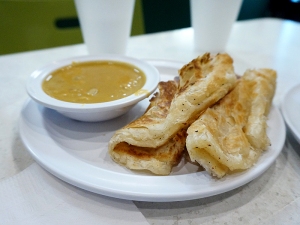 In my review of Peninsula a couple of months ago I noted that I didn’t know if there were any other Malaysian restaurants in the Twin Cities. This review does not answer that question for Satay 2 Go is in Apple Valley, 20 minutes or so south of the Cities. And a more unlikely location for a Malaysian restaurant you’d be hard-pressed to find. Not only are they in Apple Valley, a soulless suburb served mostly by an endless parade of chain restaurants, but they’re located at the far end of the parking lot of a Home Depot, next to a T-Mobile store. Eat Street this is not, and nor should you expect any of the relative glitz of Peninsula should you venture to eat here.

And should you venture to eat here? That’s a tricky question to answer. But I’ll give it a shot. END_OF_DOCUMENT_TOKEN_TO_BE_REPLACED 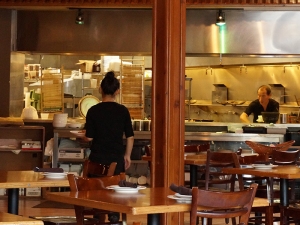 Peninsula is the premier Malaysian restaurant in the Twin Cities. I’m not sure, actually, if there even is another worth the name—if so, no one’s ever mentioned it to me. Unsurprisingly, its menu serves a sort of South East Asian greatest hits, much of which is not terribly inspiring (lots of very sweet takes on Thai dishes, for example). Some of their Malay dishes, however, can be quite good, and it’s possible to eat quite well there if you pick your way carefully around the menu. Over the last seven years we’ve done just that and through our extended trial and error I offer you the following recommendations of most of the dishes that we like best there. What follows is a report on two meals eaten a month or so apart (first in late August, and then last weekend). END_OF_DOCUMENT_TOKEN_TO_BE_REPLACED