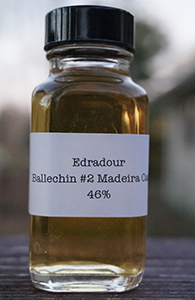 After a week of 20+ yo whiskies and a week of 10 yo whiskies, might as well give this week a theme too: wine cask whiskies. Yesterday I had the Springbank 12, Claret Wood, and here now is Edradour’s second release of their limited edition peated line, matured in Madeira casks (I’ve previously reviewed #3, #4 and #5 and last week reviewed the brand new regular release 10 yo).

I think the only other Madeira cask whiskies I’ve had have been from Springbank and I liked both of those a fair bit (see here for the 14 yo K&L put out a couple of years ago; I guess I never got around to reviewing the 11 yo that I liked even more; hmmm I think I might have a large’ish sample saved from that one). And I’ve also liked all of these Ballechins. A good omen? Let’s see.

This sample, like that of the Ballechin 10, came from Florin (the junior senator from Indiana). I introduced Florin to the Ballechin series via a sample swap a while ago and now he’s like some goddamned evangelist for the line, won’t shut up about it. That said, I can’t recall what he thinks of this one.

Ballechin #2, Madeira Casks (46%; from a sample received in a swap)

Nose: Sweet peat, quite briny with sea shells and rotting kelp; some other decaying organic matter in there too. Gets saltier as it sits and there’s a little bit of pencil lead too now. As it sits the rotting stuff gets a little closer to ripe trashcan on a hot day than I would like. And then it takes a turn for the farmy (think manure). Water doesn’t seem to do anything interesting for the nose.

Palate: Ashier peat on the palate to start and then it turns quite sweet. That pencil lead is here too, but not a whole lot else at first. A little spicier on the second sip (pepper) but, again, not much else other than an indistinct sweetness. Some bitter notes emerge on the third sip and beyond (vegetal bitterness, as in bitter leafy greens). With water there’s a bit of vanilla but nothing of real interest.

Finish: Medium-long. Ashy peat mingles with the sweetness, which now has a hard candy’ish aspect to it and they slowly wash out. With time it gets even ashier, almost verging on tarry at the end. With water the ashiness is all there is.

Comments: Not bad but probably my least favourite of the ones I’ve tried. There’s not a whole lot going on here other than increasingly farmy peat (wish that initial coastal note had hung around and showed up on the palate) and anonymous sweetness. I preferred it without water.