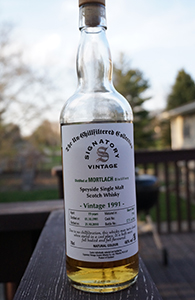 Now that my number of open bottles is down below 40 I’ve begun to finally open a bunch of not particularly exciting bottles that I purchased some years ago in my great hoarding period and put away for no good reason. This Mortlach from Signatory’s UCF line was one of those. I opened it a few months ago for one of my local group’s tastings and while it did not set anyone’s hair on fire, almost everyone liked it. I’ve been drinking it regularly since then and here now are some formal notes.

Nose: A little metallic; raisins, a bit of orange peel and a bit of dusty wood. Not a whole lot of interest. A little more expressive with a few drops of water but still not particularly interesting.

Palate: More vibrant than on the nose. All the same stuff but more intensity and also after a few seconds more sherry. None of the meaty quality usually associated with Mortlach though. Sweeter on the second and third sips but the metallic note expands and there’s something herbal/vegetal too (dill? fennel?). With more time it gets a little spicier (pepper) and then the orange expands as well. Brighter still with water and then the metallic note returns..

Finish: Medium. Nothing new develops. Well, there’s a minty/menthol coolness in my mouth at the very end. Water extends the finish and keeps the citrus going much longer.

Comments: This was a changeable one. It went from drinkable enough to too metallic to quite nice again once the citrus expanded on the palate. None of it added up to anything amazing but it wasn’t boring. Better without water.