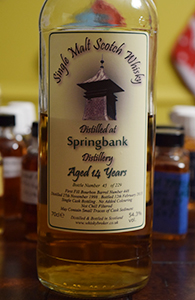 There’s not a whole lot of indie Springbank around and most of it tends to be expensive. And so when this release from Whiskybroker popped up a couple of years ago I jumped on it: Whiskybroker are known for their very fair, bordering on low prices. I opened it earlier this year at one of my local group’s tastings. This was somewhat different from our usual tastings as we drank two Springbanks of the same age but from different cask types, followed by two Laphroaigs of the same age but from different cask types. I’ve already reviewed the two Laphroaigs (here and here) and now I’m finally getting around to the Springbanks (Ol’ Jas, rejoice!). I was surprised at the tasting by the peaty character of this cask. I’m guessing this was distillate earmarked for release as Longrow—I think I’ve read in a couple of places that Springbank don’t allow indie releases under the Longrow and Hazelburn names (please correct or confirm if you know more). Anyway, let’s get to it.

Nose: Brine, mild prickly peat, the usual Springbank leather. After a couple of minutes it’s nuttier and the prickliness is now more mineral oil than peat. A bit of lemon too now and salt crystals rather than brine. With water the fruit gets more custardy (and sweeter) and there’s also some ham.

Palate: Pretty much as promised by the nose and pretty much in that order except the prickly/mineral thing is sweeter here and there isn’t as much of a citrus quality. Saltier on the second sip and sootier. Gets even saltier as it goes but that minerally sweetness is right there with it, keeping it company. Water pushes back the salt, brings out more sweetness and integrates the whole; no new notes as such but the mouthfeel is thicker now.

Finish: Long. The peat intensifies (more in the hot tarmac family). The salt expands as it goes. Water makes it longer still and knocks the salt back here as well.

Comments: Yeah, tonight this tastes very much like the last Longrow 14 I had. And, yet again, I’ll note the through line connects this profile to that of peatier bourbon cask Clynelish and to Talisker (and also peatier, bourbon cask variants of Highland Park). Not much vanilla despite it being from a first-fill bourbon barrel. Somewhat simple neat but more interesting with water; very nice both ways.