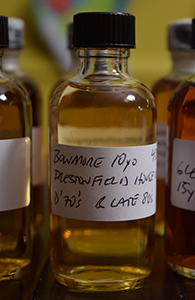 Today is the third anniversary of my blog. And since my very first review was of a Bowmore it’s become a mini-tradition to review a Bowmore on each anniversary. I began with the lowly Bowmore Legend,  moved up to the OB 12 for my first anniversary and then to the OB 18 for my second anniversary. For my third anniversary I’m going back down in age, to this 10 yo about which I know nothing other than that since it was bottled in the late 1980s it must have been distilled in the 1970s. I believe this was an official bottling too.

It’s been an unexpected three years—I never had any particular ambitions for the blog and never imagined that I would have the readership that I’ve gradually come to have. My audience is still quite small compared to many but it’s quality not quantity that counts. Now you can be a smart ass and point out that with five posts a week on average I certainly seem to post a high quantity. But enough cloying sentiment!

Nose: Cereals to start but lemon and ashy smoke start making their way out pretty quickly; the citrus takes a musky turn (makrut lime peel) and there’s some diesel mixed in there too. Gets more and more coastal as it sits with the lime joined by oyster liquor and quite a lot of salt. Some sweeter fruit too now in the background (peach?) along with some floral notes. With more time some vanilla pops out as well. With water the vanilla gets a little creamier and the smoke backs off.

Palate: Starts with the mild smoke and then the acid comes crashing in. Not quite as much happening here at first as on the nose. The mouthfeel is thicker than the abv would suggest. On the second sip the smoke is even more apparent and now it’s reminiscent more of coal than ash. On the third sip there’s more of the lime—regular lime zest—but the coastal notes from the nose and the sweeter fruit aren’t here. As it sits the smoke gets more dominant but it’s also sort of one-dimensional and uninteresting. Let’s see if water does anything for it. Well, a little more fruit but it also gets more astringent.

Finish: Long. More pepper here along with the mild, ashy smoke and the acid. Gets more bitter (zesty) as it goes. As on the palate with water.

Comments: The palate was not quite at the level of the nose;  on the whole, this is a solid, very drinkable malt, nothing more. Maybe this would have been much better at cask strength but I have to say the last edition of the Tempest (also 10 years old, also bourbon cask) that I had was a bit better. The 1970s are not always better than the 1990s or even 2000s when it comes to whisky.