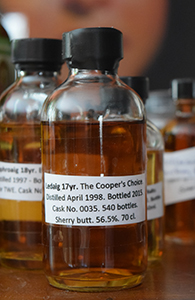 I’ve had (and reviewed) quite a few high quality young, sherried Ledaigs of late (see here, here, here, here, here and here). Most, though not all, of those were distilled in the mid-2000s. The teenaged Ledaigs from the previous decade that I’ve had have not been sherried and have generally not reached the heights of their younger, sherried siblings. Here now is a 17 yo from 1998 from a sherry butt. Will it reverse this trend?

This was bottled by Cooper’s Choice. I don’t know much about this label—as per Malt Madness, this is a brand of the Vintage Malt Whisky Company, founded in 1992 by an ex-employee of Bowmore. Johannes notes that they offer good value. I’ve not had very many of their bottlings so I cannot comment on that, but they do seem to be more ubiquitous in the last year or two with both cask strength and non-cask strength releases. Well, let’s see what this is like.

Nose: Strong rubbery peat with organic (rotting) notes coming through as well. Ashy smoke below that, some cereal and expanding lime. Really quite pungent—like smell it from across the room pungent. With more time the rubber subsides and rounder notes begin to emerge: orange peel, some caramel, a bit of honey, even a bit of vanilla. The fruit becomes more expressive as it sits (more lime now) and it gets nuttier too. Softer with water. The smoke is still there but the citrus and vanilla are more prominent than before.

Palate: Hits with the ashy smoke, the orange and then more acidic citrus. The smoke expands on the mid-palate picking up some pepper. On the second sip it’s the lime that makes the first impression but the ashy smoke and a truck load of salt are right behind (cracked black pepper too). The pepper keeps expanding with each sip—a mix of cracked black pepper and dried red chilli pepper now. With a lot of time it mellows nicely and the sweeter notes come to the fore. As on the nose, water emphasizes the citrus (brighter and more acidic here still) but the smoke and spice are right behind it.

Finish: Long. Very long, and very intensely ashy and smoky, with the lime and pepper hanging on a good while too. Saltier as it goes too and the lime expands. A little sweeter with water.

Comments: I had 100 ml of this. I drank it all over three sessions over the course of one long evening, The first 30 ml I found almost too aggressively smoky and peppery. I would have given it 86 points and pronounced it completely overpriced. I poured the next 30 ml an hour and a half later and it was far fruitier, more balanced. Up to 87/88 points now. The last 40 ml I poured another hour later and liked even more still: the nose was softer, the sherry was more apparent. Up to a clear 88 now and I couldn’t talk myself out of buying a bottle and seeing how it continues to develop.