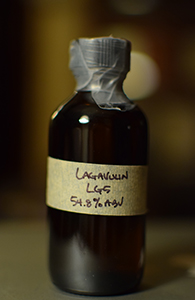 This is the fifth release of Lagavulin from The Whisky Exchange’s Elements of Islay series. These are 500 ml bottles with periodic table of element style names that refer to the distilleries (though you’re supposed to be coy and not take the identities for granted). The early entries in the line came out together at a steady clip some years ago (and I purchased most of them) but I lost sight of them in there somewhere. I reviewed the Lg1 and the Lg2 relatively early in the life of the blog but I never saw any sign of the Lg3 or the Lg4. Given how much I liked those early entries in the series when I had a chance to grab a 2 oz sample from a bottle split I went for it. This has received a heady score from Serge Valentin on Whiskyfun and so I’ve particularly been looking forward to it. Having started the week with an outstanding peated malt from Islay it’ll be nice to end it with another one as well. Then again Serge liked the recent official 8 yo quite a lot more than I did...

Nose: Paraffin, lemon juice and olive brine, and smoke, of course—a lot of it. But it’s bright and acidic to start. Much saltier on the second sniff and more phenolic (bandaids); just the faintest hint of mezcal too. Mellower and sweeter with water and the mezcal gets pushed back.

Palate: Sweeter here with a rich, mouth-coating texture. White pepper and salt crystals intermingle behind the smoke which expands as I swallow. Gets more minerally and more cereally as it sits and the smoke is tarrier and inkier and it’s more phenolic on the whole. With time the signs of youth expand (more of that mezcal character that peeped out on the nose). As on the nose with water at first but then the lemon and pepper expand and the smoke gets ashier.

Finish: Long. The smoke (ash and coal) and salt hang out for a while; at the very end there’s a sweetness in the wet stone family. Saltier with water and more peppery too.

Comments: I have no idea how old this is but it’s much better than the recent OB 8 yo. It’s not that it’s so different (though there’s no vanilla here), but that it’s less raw. It’s very good but it falls well short of 90 points in my opinion. Maybe I’m getting less tolerant of youthful notes in peated whisky? (Now I await Billy Abbot of TWE telling me that this might well be 17 years old…)