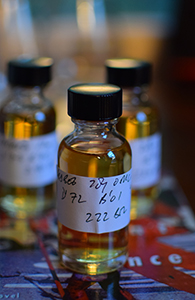 I started the month with a Douglas Laing cask of Ardbeg 27, 1973 that was bottled for their original Old Malt Cask line in 2000. In the middle of the month I posted a review of another of their casks: a 28 yo from 1972 that was bottled in 2000. I liked those two a lot. Here now is the third of those early 1970s OMC casks that I got in on via bottle splits. Will it be as good as the other two? Only one way to find out.

Nose: A big phenolic hit as I pour; tarrier smoke when I sniff, with lime peel and salt right behind. Gets more medicinal almost immediately and then keeps going (disinfectant, gauze bandages, iodine, rubber gaskets on medicine jars). After a minute or two there’s some soft vanilla (just a bit) and some ham, a bit of sackcloth and quite a bit more salt. Gets brighter (acidic) and “cleaner” and less tarry as it sits. With a drop of water it gets even more austere: smoky almond oil.

Palate: Sweeter arrival but behind it is all that stuff from the nose. The lime is more pronounced on the second sip and that rubber gasket thing and salt crystals come in with it. Nice texture. There’s not a lot of development after that but when you start so close to perfection there’s no need for development. With water it gets brighter and more peppery at first and then the smoke picks up again. And the texture gets oilier.

Finish: Long. Starts soft and then expands with inky smoke, picking up salt along the way. Peppery at the very end. Seems to get longer with each sip. Tarrier here than on the palate. With even more time the smoke gets sootier at the end. The phenols pick up again with water.

Comments: This one is up there with the 1974-1998 Provenance. Can this style of peaty whisky get any better? I’m not sure.