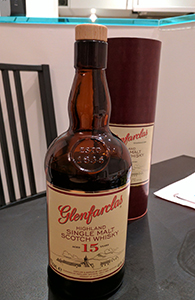 I’ve recently reviewed the Glenfarclas 8, the Glenfarclas 10 and the Glenfarclas 12; here now is my review of the Glenfarclas 15. Like the 8 yo, it is not available in the US. Its status, however, is not as murky as that of the 8 yo: it is a staple of Glenfarclas’ lineup in the UK and Europe. It differs from the other releases in Glenfarclas’ regular age-stated lineup in that it is bottled at 46% abv rather than 40% or 43%. This is apparently because that’s the strength at which George Grant’s grandfather always preferred it. The 15 yo is very popular among whisky geeks, partly because it’s more sherried than its younger siblings, partly because it’s at 46%, and also because it’s dependably good and reasonably priced. Back in the US I tend to hoard my bottles a little jealously as they’re not easy to replace: as the cost of international shipping makes it less of a value, I tend to get my Glenfarclas 15 via friends visiting the UK. Here in London though it’s readily at hand and I’ve been going through this bottle at a rapid rate. So even though I’ve almost drunk the bottle down I’ve not recorded separate notes for different points in its life—as it’s been open just over two weeks. Anyway, let’s get to it.

Nose: Obviously more sherry here than in its younger siblings, and it’s a slightly dry, leafy sherry at first, rounding off after a bit into richer fruit (berry compote). Some pine resin with time. With more time there’s citrus (dried orange peel). A drop or two of water emphasizes the orange peel and the resin.

Palate: Citrus to start (orange) and then that leafy thing from the nose and some wood. Saltier and nuttier on the second sip. Nice texture. With time the wood is more apparent but it’s not tannic at all. Water brings out more of the resiny quality here too and makes the whole richer.

Finish: Medium-long. The salty, nutty notes dominate here with spicier wood popping out at the end. As on the nose and palate with water.

Comments: Solid sherried whisky. Nothing to rave about here but it’s nicely balanced and a good example of how a whisky can be richly sherried without being a sherry bomb. Wish it were available in the US. Better with a touch of water, I think.

I’m going to take a break from Glenfarclas for a few weeks now. In May I’ll complete my reviews of their age-stated range with the 18 yo and the 21 yo.