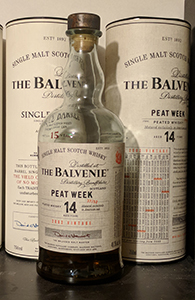 Okay, after a run of three low-utility reviews of whiskies from Kilchoman, Glenlivet and Glen Scotia released between 5 and 13 years ago, let’s get all timely with a review of a whisky that is not at all hard to find in the US: the recently arrived Balvenie “Peat Week”. I’ve previously reviewed a 17 yo Balvenie matured in a cask that had previously held peated whisky distilled at Balvnie. (I was not impressed). This one, as I’m sure you know, is an actual peated whisky made at Balvenie. Apparently, since 2002 (or even earlier) Balvenie has been making peated malt one week in the year and this is the first regular release from those runs, apparently limited to 3000 bottles worldwide—how many of those are in the US, I don’t know.

In a time when distilleries replace information on labels with silly names and marketing stories, Balvenie are to be congratulated for putting an age statement and a vintage on this release. Nonetheless, I am tempted to say that they’ve gone a bit too far in the direction of full transparency: my eyes glazed over as I tried to make sense of the small-print chart on the tube (I gave up quickly).

They’re owed fewer congratulations, I think, for selling this at around $100 in the US (with or without tax, depending on where you are). Yes, it’s apparently a limited release, but it’s also only 14 years old (and not at cask strength). I remember when the (often) great 15 yo Single Barrel releases were available for less than $60 (and I also remember the 14 yo Caribbean Cask in the $60 range). But, let’s be frank, there are distilleries selling far younger whisky these days for not very much less money (and some for more: see the various Octomores, for instance).

I purchased this bottle a few weeks ago and opened it for my local group’s October tasting. It was the top whisky on the night (beating the Benriach Authenticus 21, a Bowmore 10 from Whisky-fässle and the 2017 Cairdeas). I quite liked it too. These notes are being taken from the midpoint of the bottle.

Nose: Wood smoke, cereals and some bitter oak extract. On the second sniff there’s some citrus and some honey which then begin to expand. The smoke gets more earthy and farmy as it goes. More acidic with a bit of water and creamier as well.

Palate: Pretty sweet to start and then the bitter oak kicks in with the smoke below it. Gets more peppery as I swallow. The fruit and honey are less distinct here. Let’s see if they emerge with time. Yes, with more time the bitter oak is joined by lime zest. With more time still there’s something vegetal/rooty about the bitterness as well. With water the smoke and the citrus are nicely integrated and it’s less bitter.

Finish: Long. Quite a lot of salt here along with the oak and smoke. The late-emerging lime continues here too. As on the palate with water (much brighter and less salty).

Comments: From the top of the bottle to the middle this has been better than I’d feared it might be. Much better than the 17 yo peated cask, certainly. A very different flavour of peat than obtains on Islay or Orkney or Skye or in Campbeltown and the softer Balvenie characteristics are not dominated by the smoke. A good, balanced whisky. However, at the price I will not be replacing the bottle. And I will say I liked it better, on the whole, when first opened. More specifically, I liked it better neat when first opened; at the midway point I like it better with water (especially on the palate).