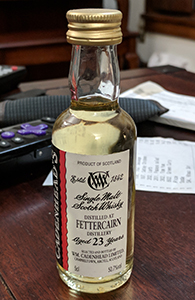 Fettercairn is not located far from my last stop, Glencadam, and may perhaps be even less beloved a distillery. They’re owned by Whyte & Mackay, who also own Dalmore and Jura, and who are in turn now owned by the Phillipines-based Emperador Inc. They don’t put out very much malt whisky. They released a series of older malts in 2009—a 24 yo, a 30 yo and a 40 yo—but I don’t believe these were regular releases. The Fettercairn Fior, which was first released in 2010 or so, and which contains a fair bit of peated malt may, however, still be a going concern (it’s not available in the US). I assume they’re mostly producing for Whyte & Mackay’s blends. Anyway, all unloved distilleries are more than capable of of producing excellent single casks. And while none of the other Cadenhead’s releases from this early 2017 outturn (from Balmenach,  Pulteney, Aultmore and Glen Spey) that I purchased samples of alongside this one in London in May turned out to be excellent, hope springs eternal.

Nose: Lime peel, malt, sweet berries of some kind. No real change or development with time. Let’s see what water does. It pulls out a bit of vanilla and more of the berries.

Palate: Pretty much as promised by the nose with more malt and some wax. Nice mouth-coating texture. The bitter note from the finish starts showing up earlier with every sip, but with time gets less plasticky and more zesty. Water pushes back the astringent note but doesn’t really make it very interesting; if anything it’s a bit grainy now.

Finish: Long. There’s a subtle expansion of fruit as I swallow but then it also gets a bit plasticky. As on the palate, it resolves into bitter lime peel/zest with time. However, with even more time it comes back again. As on the palate with water.

Comments: The nose, though not complex, was the best part. There was some intriguing, delicate fruity action on the palate/finish but it was swamped by the bitter notes, which edged too far into plastic territory for me. Call me conservative, but I don’t enjoy plasticky notes in my whisky.