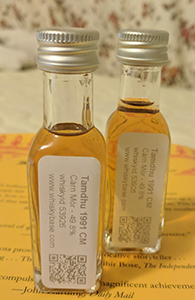 After an Allt-a-Bhainne released in 2012 and an Old Pulteney released in 2014, let’s complete the trifecta of reviews of whiskies no one cares about with a Tamdhu released in 2013 or 2014. It’s also hard to know if anyone cares about Tamdhu in general. It’s certainly better known than Allt-a-Bhainne, having put out official single malts for some time now, and having relatively recently overhauled their branding in a premium direction; but I’m not sure when the last time was I heard or read anyone talking excitedly about Tamdhu. Of course, every distillery is capable of putting out great casks, and I have liked 75% of the Tamdhus I’ve reviewed a fair bit (the most recent I liked more after it “opened up” in the bottle after a few months. That was also—like this one—a first fill sherry cask, but about half the age and from a butt not a hogshead. 22 years in a sherry hogshead does seem a long time (unless it was only re-racked into the sherry hogshead for a shorter period at the end of the maturation period). Let’s hope this isn’t an oak bomb.

Nose: Fruity off the bat but with berries rather than the more typical orange peel/apricot/raisins of long sherry maturation. Gets winier as it sits—blind, I would so far have guessed this was a port or red wine cask. There’s an organic note in there as well—somewhere between damp oak and decomposing leaves. Nothing of note happens with water.

Palate: More citrus here—orange peel—and a thick maltiness that transitions into fruitcake. Rich mouthfeel. More oak with time, somehow both dusty and musty. Let’s see what water does. It integrates the fruit and the cake and the oak a bit better and also brings out some of the leafiness from the nose.

Finish: Medium-long. The fruitcake gets nuttier and more raisiny and then some oak jumps out as well. As on the palate with water and the finish is a bit longer now.

Comments: This tastes like fruitcake in a glass. Not what I was expecting—and not too oaky—but an interesting surprise. Interesting doesn’t mean excellent though—if I had a full bottle I don’t know that I’d reach for it very often. Still, it’s good to taste something that doesn’t just taste like most other sherry matured malts out there.