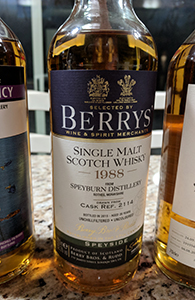 Speyburn is a somewhat unsung distillery. They are part of Inver House’s portfolio, which also includes Pulteney, Balblair, Knockdhu and Balmenach; and it’s safe to say that of those five distilleries, Speyburn is the most unsung. Indeed, they’re often the butt of jokes among whisky geeks. Of course, any distillery is capable of producing very good casks but when a 26 yo cask from an unsung distillery hangs around for a couple of years after release, it’s forgivable perhaps to think that it may not be very good. That was my thinking, at any rate, when I came across this bottle on my visit to Berry Bros. & Rudd in London last spring. The gent at the store prevailed on me to take a taste from an open bottle and when I did I was rather impressed by how fruity it was. It seemed like a pretty good deal at £125 and I purchased the bottle. When I got back to my flat, I cast around online to see if anyone had reviewed it and, of course, Serge had. I was surprised to see that he had given it only 78 points. I was also glad that I had not seen his review and score before going to the store, as in that case I might not even have bothered with a taste. I opened the bottle for my local group’s tasting in February and everyone else really liked it too. Here now are my notes.

Nose: Honeyed fruit, malt, toasted oak, cereals. Gets fruitier as it sits (sweet apple, lemon, blueberry) and the malt gets muskier. With a drop of water there’s more lemon and a bit of peach.

Palate: All the fruit from the nose, followed by some oak, and then a big burst of muskier fruit as I swallow (pineapple, a bit of tart mango). Very nice texture. The oak gets a bit stronger with every sip but it mostly provides a bracing frame for the fruit. Spicier with water and the musky fruit gets pushed back at first but then comes roaring back.

Finish: Long. The musky fruit and some prickly oak trade notes for a bit. More peppery and then a bit astringent with time. Still bitter with water (lime peel rather than oak now) but the fruit’s still here.

Comments: Frankly, the fact that this bottle was still available at Berry Bros. last year is testament to the reach and influence of Serge’s ratings (the few scores on Whiskybase tend in a very different direction). And I am surprised by Serge’s notes on this whisky. I say this not because we have different ratings for this whisky but because it doesn’t read like we tasted the same whisky. I would normally expect Serge to like a fruity whisky like this one (he also describes it as a sherry cask, and I don’t think it is one; or if it is, it’s an nth refill). Anyway, if you come across a bottle, I’d recommend trying it if you can. I’m certainly glad I took the chance to taste it at the shop last May. The bitterness on the finish is all that holds it back from the next tier for me.