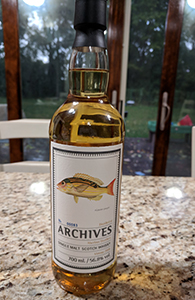 Here is my first timely review in almost a month. This Aberlour was recently released by Archives (the label of the excellent Whiskybase store in Rotterdam) and is still available. It has a number of things to recommend it: the Archives releases are always at least solid; it is priced very fairly in the current market; and it is a bourbon cask Aberlour. I sing the praises of bourbon cask Aberlours every time I review one; it really boggles the mind that the distillery (or rather its owners) don’t do more to feature their bourbon casks. I opened this particular bottle recently for one of my local group’s tastings—the theme was ex-bourbon whisky and it was well-liked by everyone in attendance. I thought the oak was just a little bit too assertive but not enough to mar the whisky. I’m interested to see if it might have settled down now that the bottle is at the halfway mark. Of course, those who are less sensitive to oak in whisky than I am will probably not be bothered by that aspect of it anyway.

Palate: Comes in sweet with the oak and malt right behind. Flashes of muskier fruit as I swallow. Very drinkable at full strength. On the second sip the oak is more talkative but the musky fruit is louder too (can’t quite pick it—apple cider?). And there’s pepper and more acid as well. Let’s see if water knocks the oak back a bit. It does, a bit, but it also makes it spicier.

Finish: Medium. Oak and spice are the story here. As on the palate with water.

Comments: Another very good ex-bourbon Aberlour. The oak remains a bit too pronounced for my liking, though not as much as in the Exclusive Malts 13 yo that I reviewed in June; the greater oak contact in the smaller barrel (as opposed to the more traditional and a bit larger hogshead) is probably the culprit. It’s a solid whisky regardless and will probably be liked more by those with greater oak tolerance.