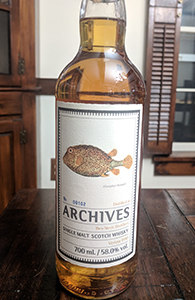 Continuing my miniseries of older whiskies (after Monday’s Tomatin 25 and yesterday’s Caperdonich 27), here is a Ben Nevis. Unlike the other two, it was released this year but, alas, this review is not very timely. I purchased the bottle from Whiskybase—who bottled it under their Archives label—a couple of months ago and waited a bit too long to open and taste it. After my first taste I raced back to their site to get another but it was gone. Yes, I liked it a lot. What is the other proof of this? Well, I’ve finished the bottle less than a month after I opened it. Also, I recently took it to a whisky gathering in St. Paul that featured some very heavy hitters (early 70s Ardbeg, early 80s Port Ellen and Caol Ila, late 70s Laphroaig 10 and so on) and it held its own. Lovers of fruity malts already know this, but the once dodgy Ben Nevis distillery is now one of our very best sources for exuberantly fruity whisky. Of course, as it’s Ben Nevis it’s got some funky notes mixed in but that’s part of the fun.

Nose: Malty at first (roasted malt) and then some powdered ginger and digestive biscuit before a wave of bright fruit (citrus: grapefruit and lemon zest) arrives with a beany/nutty note right behind along with a hint of gasoline. It’s all blended together really nicely. As it sits, the acid from the fruit gets a chalky edge. With more time still it gets sweeter and there’s some dusty oak mixed in as well. Water brings out vanilla and pastry crust alongside the fruit.

Palate: Comes in with the roasted malt and some spicy oak and a hint of woodsmoke, but as I swallow there’s a big explosion of fruit: the citrus from the nose plus guava, passionfruit and tart mango. Very drinkable at full strength. The fruit comes out earlier as it sits and the chocolate from the finish shows up earlier as well. With water the fruit expands as does the bitter chocolate.

Finish: Long. The fruit transitions back to the spicy oak before popping out again along with some bitter chocolate. With water more of the same plus some white pepper.

Comments: This is quintessential Ben Nevis: an idiosyncratic mix of malt and fruit and nut along with some notes that you would think would derail it but actually work really well with everything else. Very good neat but a few drops of water and a lot of time puts it over the top. As of now older Ben Nevis from the independents is still affordable. How long will that last?