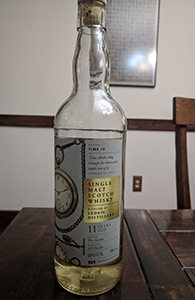 Okay, after an Armagnac, a Cognac, and a rum, let’s get back to whisky. This 11 yo whisky was released by the Whisky Exchange in a series they called Time. I’ve previously reviewed two of the other releases from this series: a Benrinnes 20 and a “Family Owned Distillery” 15 (probably a Glenfarclas). I was intrigued by the other releases as well but didn’t get around to ordering them before they sold out/TWE stopped shipping to Minnesota. Anyway, I liked both of the others I did buy a lot, and I can tell you the streak continued with this Ledaig. It took me a long time to get around to it—I eventually opened it as a sparring partner with a stupidly sherried Ledaig (also 11 years old and also from the Whisky Exchange). That one had the maximum sherry thing going on with the peat but this bourbon cask whisky held its own quite well. I drank it down quite quickly after opening it. Here now are the particulars.

Nose: That very Ledaig funky mix of rubbery peat, rotting rodent and underneath some unlikely vanilla and cream. Not sure how but it works. Gets saltier as it sits. With water the funk recedes, the vanilla expands and some lemon emerges.

Palate: Less funky here with sharp smoke and phenolic peat, inky and intense. Develops a bit of a char and even more pepper as it goes. A perfect drinking strength, but let’s see what water does. The peat gets less intense with water and there’s just a bit of plasticky bitterness.

Finish: Long. The smoke goes and goes and the salt from the nose pops up at the end. With water the pepper joins the salt at the end.

Comments: Very Ledaig on the nose, more of a conventional heavily peated whisky on the palate; good all over.