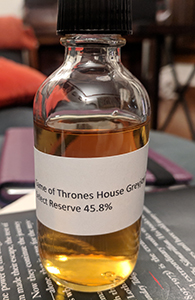 My third Game of Thrones whisky review is of the House Greyjoy release, a Talisker. I am posting it today in honour of the passing of Theon Greyjoy (spoiler alert!), one of the few interesting characters on Game of Thrones over the course of the series—the only others, in case you’re wondering, were/are Sansa Stark, Roose Bolton and Tywin and Jaime Lannister (I am happy to have an argument about this in the comments).

This is one of the few distillery/House matches this series got right. House Greyjoy rules the Iron Islands and Skye is an island, and both are on the west coast; plus the peaty austerity of Talisker fits well with the dour nature of the Iron Islanders. That’s where the similarities end though: Talisker usually makes highly enjoyable whisky whereas, Theon aside, the rape-Vikings of the Iron Islands are a huge drag both in the tv show and especially in the books where they—along with Ramsay Bolton—carry the weight of George R.R. Martin’s near-pornographic obsession with sexual violence and torture. Yes, we get it, George, real knights and ladies were assholes.

Anyway, on to the whisky! Unlike the Targaryen/Lannister and like the Stark/Dalwhinnie this does not have an age statement, which in the case of Talisker is a bit ominous. What is dead may never die but it’s easy to say that if you haven’t had the Talisker “Skye” (I did say “usually” above).

Nose: Recognizably Talisker with the pepper mixed in with earthy peat and sherry notes (orange)—very reminiscent of the last Distiller’s Edition I had, actually. As it sits it picks up some creamy notes (milk chocolate) and also some salt. With more time there’s more of the citrus (orange peel) on the nose. Less peat and more malt and fruit with water.

Palate: My first thought is that the texture is thin but my second thought is that this is pretty solidly Talisker. Pepper and salt and pretty much everything else from the nose. On the second sip there’s more oaky bite and more sweetness but it’s all nicely balanced still. Water washes the palate out a bit.

Finish: Medium. The oak and the peppery peat have the last word.

Comments: This is not bad at all, a whisky I’d be happy to spend more time with if I had a full bottle: which is more than I say of any Iron Islands-centered episode of Game of Thrones (or chapter of the books). Certainly far better than most of Talisker’s regular NAS releases and probably a decent deal at the price it originally sold at.