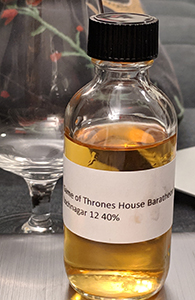 You’d think that if you had a dragon stuck with a crossbow bolt in one battle, and another taken out by an all-world javelin thrower in another, you’d spend a bit of time thinking about your aerial strategy, but I guess there hasn’t been a flight combat school in the world of Game of Thrones for a long time. Anyway, this is not the House Targaryen whisky I’m writing about today, it’s the House Baratheon whisky. I swear I had this scheduled before it turned out there was going to indeed be a new Baratheon lord.

Well, I’ve complained about the distilleries selected for the Game of Thrones selections not really matching up with the houses in the books and show (a smoky whisky for House Lannister instead of the one that has gold in its name, a mild whisky for dour House Stark) but the Baratheon selection does fit as well as the Greyjoy/Talisker selection. There’s the fact that Robert Baratheon is as close as we’ve had to a legitimate monarch in the series; and also House Baratheon is a small upstart house and Lochnagar is the smallest distillery in Diageo’s portfolio (or one of the smallest anyway). Lochnagar was also destroyed before being rebuilt some years later and it seems the same is happening with the Baratheons. But how about the whisky? Is it anything Robert Baratheon would have wanted to get drunk on? Let’s see.

Nose: Somewhat generic: there’s some citrus (orange peel), something metallic, a bit of wood dust—that’s about it at first. A little more intensity on the citrus front with water.

Palate: The texture is better than you might expect at 40% but there’s not a whole lot going on flavour-wise: some oak and again generic whisky notes. Picks up a bit with time with some sweeter notes (a bit indistinct) showing up. Water not as good on the palate as it thins the texture.

Finish: Medium-long. Gets spicier here but no more interesting. The wood gets a bit perfumed with water.

Comments: This is very much in blend territory. It’s drinkable and doesn’t have any flaws but it is not at all interesting. I guess it’s not a surprise this one hung around longer than the others. Water pulled it up a bit.