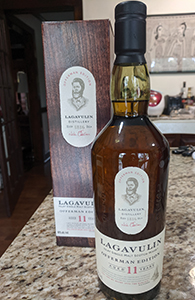 Hello, here is a celebrity whisky! As you know, when celebrities are involved in whisky branding the whisky is always good. See Great Odin’s Raven, Haig Club etc. etc. Actually, I’ve not had either of those two blends; for all I know, they are decent. (I’ve not had the Ron Jeremy rum either; I hear that really grows on you.) Other things I have not done include watching any of Parks and Recreation. My Offerman exposure is limited to his excellent, scene-stealing turn in the second season of Fargo. This, of course, does not mean that this whisky that bears his name will be any good. On the other hand, Offerman is apparently a long time, non-stunt Lagavulin aficionado and one would hope that Diageo would not screw with his good name by scraping together warehouse detritus and vatting it together with an eye toward a simple celebrity cash-in. Or did he actually have something to do with its creation? I’ve not read any spirits marketing since 2009 and so I have no idea. If you know more about this, please write in below. Here now are my notes.

Nose: A big phenolic blast with iodine and ink and sweet notes of coastal rot (kelp); smouldering leaves are mixed in with the peat smoke. As it sits brine comes through bringing some vanilla and kalamata olive with it. With a lot more time there’s some milky cocoa as well. A few drops of water, added almost an hour in, push the smoke and phenols back a bit and bring out more of the cocoa and vanilla.

Palate: Leads with the brine and salt and a lot of it. The smoke arises in a big wave as I swallow, more tarry and less medicinal than the nose predicted. With time the brine recedes a bit and some lime begins to come through (preserved lime peel). Water pushes the brine/salt back even further but brings out more of the smoke here.

Finish: Long. The salt is ascendant here but the smoke swirls around it. Some cracked black pepper too and a bit of bitter cocoa. As on the palate with water: the smoke gets ashier and then sootier.

Comments: This is not Lagavulin on training wheels. Brinier than the 16 yo but very much its younger sibling (and makes me wish again that the Lagavulin 16 was available at 46%). It’s not particularly complex but is everything you would want in a Lagavulin of this age. I don’t know how much of a role Offerman had in the construction of this whisky’s profile but he cannot be disappointed to have his name and face on this. Highly recommended.

This will be the first of 2-3 simul-reviews this month with Michael Kravitz of Diving for Pearls. I sent him a sample from this bottle shortly after opening it. We have not discussed the whisky or seen each other’s notes prior to publishing. I will add the link to his review when I wake up in the morning.

Edit: And here is Michael’s review. He found it much sweeter than I did and liked it quite a bit less.