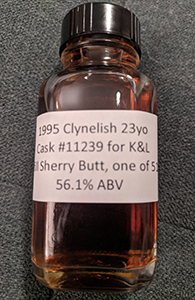 As I said in my post looking ahead to this month’s reviews, I recently participated in a split of a large number of bottles from K&L’s recent run of exclusive casks. In so doing I broke a promise to myself that I would not fall anymore for the promise of these exclusive casks, very few of which have in the past delivered for me. But I have poor impulse control. Hence this Clynelish which is being sold for $250 before tax, accompanied by K&L’s usual mix of over-the-top lyricism and incoherence. I don’t really spend this kind of money on any whisky anymore but I couldn’t resist 2 ounces to see if it could possibly live up to the breathless descriptions of it as a “legendary cask” of “superlative quality”, “deep and profound like the ocean itself” posing questions to the unprepared drinker such as “if you were a hotdog would you eat yourself?” and so on. Of course, what they don’t say is that there have been a large number of these sherried Clynelishes hitting the market in the last couple of years, getting more expensive each year—I reviewed a 21 yo, 1995 almost exactly two years ago, a Signatory exclusive for the Whisky Exchange that went for £120. Will this cask, two years older, really be so different from the sherried mean? Let’s see.

Nose: Richer sherry (caramel, raisins) notes mixed with dry leaves and a yeasty, bready quality. On the second sniff the yeast and the dry leaves are to the fore. Quite a bit of salt beginning to come through too now. With more time and air there’s more of the rich sherry again (dried orange peel now). A couple of drops of water push back the sharper notes and pull out some tobacco and more of the orange peel; some struck matches now too.

Palate: Very peppery; thankfully not as yeasty as the nose suggested it would be. Hits harder than the abv would indicate. More acidic on the second sip and here comes the truckload of salt right on cue too. With time there’s some fruit (orange peel. apricot) but it has a hard time making it out past the salt and acid. Okay, let’s see what water does. Yes, it pushes the salt and acid back here too but it doesn’t pull out very much of the richer notes; instead the dry leaves are more pronounced (and more damp).

Finish: Medium-long. No interesting development as such. The salt lingers and lingers. At the very end there’s some bitter chocolate/coffee grounds. With time some of the darker fruit makes it out at the end. As on the palate with water.

Comments: Not bad at all, and better with water, but also nothing so very special; there’s none of the complexity you might hope to find in a 20+ yo refill sherry cask. Speaking of which, there’s a lot more sherry influence here than I’d expect to find in a refill sherry cask. Anyway, I’d pass at the price without a second thought. If you’re looking for a big, sherried whisky buy the  Glendronach 18 and save some money (when was the last time you read someone suggesting the Glendronach 18 might be a good deal at the price?).