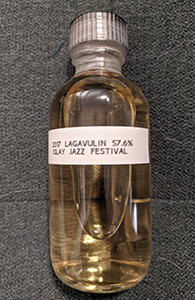 The Jazz Festival series is Lagavulin’s second annual series of special releases, bottled to commemorate the Islay Jazz festival every autumn. As I noted in my review of the 2015 Jazz Festival release, this series doesn’t seem to inspire the mania of the summer Feis Ile releases. This is doubtless due to the unpredictable vagaries of the collectors’ market which is anything but rational. Certainly, I liked the 2015 Jazz Festival release a lot. That bodes well for this 2017 release which, like the 2015, is comprised of spirit matured in refill American oak hogsheads and refill European oak butts. This is not the standard regimen for these releases: the intervening 2016 release—which I picked up a bottle of at the distillery in 2017—was matured only in American oak. In practice, however, the 2015 release did not betray much, if any, palpable sherry influence; I’m curious to see if this will be any different in that regard. Let’s see.

Nose: Bright medicinal peat: mercurochrome, lemon, dettol. On the second sniff it’s sweeter with cereal and then some kelp and ink; brine building in the background. No sign of sherry that I can make out. With water there’s some cream and also some ham brine: unlikely combination but it works.

Palate: Exactly as promised by the nose with some charred smoke added on at the backend. Very approachable at full strength. On the second sip there are some youthful notes—a slight mezcal edge. No sign of sherry here either. As it sits some cracked pepper joins the party. With time the meaty from the finish begins to show up early—charred fatty pork, to be more specific. The char gets sweeter with water and there’s more ink and a bit of uni. Sweeter and creamier here too with water and the smoke gets ashier.

Finish: Long. The phenolic smoke keeps going, picks up a meaty note and a lot of char on the way out. As on the palate with water.

Comments: Those refill European oak butts must have been nth fills. No sign of sherry whatsoever in this one either. This is very much in line with the Lagavulin 12 CS profile, which is to say it is very good. Not a lot of complexity but you don’t always need complexity when the underlying character is so good.