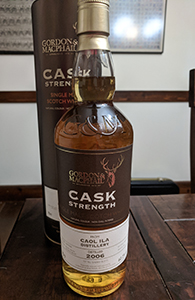 Having started the month with a review of a peated whisky from the eastern Highlands of Scotland (this Ardmore), it seems only right to head on over to what remains the bastion of peated whisky in Scotland: Islay. This is the first of a few review of peated Islay whiskies this month. We begin right off the ferry at Caol Ila. This is one of several young Caol Ilas distilled in the mid-2000s that Gordon & MacPhail have released in the past few years. Many are vattings of multiple casks, as is this one—a vatting of four first-fill sherry casks. This is actually a whisky I have reviewed before (just over a year ago). That first review was of a 2 oz sample from a bottle split. I liked that one quite a bit but it was fairly hot. The bottle is at 60.2% and the samples were probably poured from a fresh crack. As I noted in the first review, at the time of acquiring that sample I’d forgotten that I already owned a bottle. I decided to open it late last month as I was running low on high-octane peated whisky in my small lineup of open bottles and the first couple of pours confirmed the original review. A week and a half and a few pours later I am interested to see how it may have developed with a bit of air in the bottle.

Nose: Slightly rubbery peat, mezcal and fast expanding salt at first. As it sits the rubber burns off and is replaced with softer sweeter notes of cured meat and cereals. The peat turns more carbolic and is joined by some lemon. The salt is still here but now more coastal (the usual complex of kelp and oyster liquor and brine). With time the ham brine gets more intense and the smoke picks up some ink and some uni around the corners. A big squirt of water gets rid of the youthful notes, turns the lemon to citronella and pulls out some cream.

Palate: Comes in with more signs of youth (mezcal) but more or less as on the nose, which is to say very good.. More char on the second sip. Remarkably approachable at full strength but this is going to blossom with water. The mezcal turns to charred pineapple as it sits. Okay, let’s add some water. Water puts paid to the last signs of the youthful notes here as well and also calms the char down a bit. Now it’s just a lovely blend of coastal notes, clean carbolic smoke and cereal and vanilla sweetness.

Finish: Long. Pretty much as on the nose with first the smoke and then the lemon on top. The mezcal note comes back at the end.

Comments: My notes, I see, are quite close to the first set. There’s not much sign of the first-fill sherry here either, but I don’t really have any complaints on that score. And while it’s not as clean and elegant as the best ex-bourbon Caol Ilas, I like it better than I did the first time. The nose is now brilliant (with time, air, water and patience); the palate is still not quite at that level, though water takes it up a knotch. Knock the few youthful notes off and this would be headed to the next tier. And maybe it’ll get there yet as the bottle slowly approaches the halfway mark.