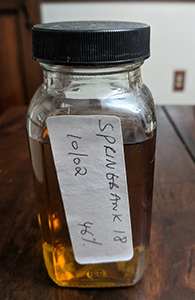 Okay, done with the heavy peat but let’s stay on Campbeltown through the end of the week. Having lapsed into relevance on Wednesday with a review of the 2020 release of the Longrow 18—a whisky that is still available—let me now go back to my core competency: reviews of whiskies released 10 years ago. I reviewed the 2016 release of the Springbank 18 last month and mentioned then that I had a reference sample saved from my first-ever bottle of the Springbank 18, released in 2010. I managed to locate it and tasted it somewhat nervously, fully expecting that it had gone flat. But it had not and indeed tracked very well with the truncated notes I’d taken on the bottle in those pre-blog days. I drank the rest of this down in very quick order after taking these notes. Spoiler alert: I really enjoyed it. However, I doubt I will buy another bottle of Springbank 18 anytime soon. This is not due to the fact that the current Springbank 18 has less sherry in the mix but because it costs the bloody earth.

Nose: Copper coins, orange peel, earthy peat, damp earth, pipe tobacco. Sweeter as it sits (both the fruit and tobacco). As it sits that coppery note moves in the direction of shoe polish and is joined by mango leather and salt (make that rock salt). Water brightens it up, brings out cracked coriander seed and knocks the peat and tobacco back a bit.

Palate: The salt, peat and dried orange peel off the top and then sweeter notes rising up as I swallow. Very nice texture despite almost a decade in a sample bottle. Gets earthier as it sits and then a little bitter (walnut peel); the coppery note is still big too. Okay, let’s add a drop of water. Saltier now and more savoury—the earthy and bitter notes recede and the orange turns to preserved lemon.

Finish: Long. The salt is the top note here but the peat follows behind it, getting ashier as it goes and ending with smouldering, wet coal. The salt turns to brine (leftover from a ham cure) at the end. The preserved lemon that develops on the palate with water continues into the finish.

Comments: Just lovely—so glad I saved some for later. Very much in line with the 2016 release, perhaps a slightly “darker” version of that. How many distilleries can pull off this contradictory mix of rich and austere? I had this at 90 points in my spreadsheet; I see no reason to change that. Hmmm now I’m curious about the current version but I really don’t want to pay close to $200 for it.

Thanks to past me for saving 6 ounces of this for present me! Apologies to future me for drinking them.