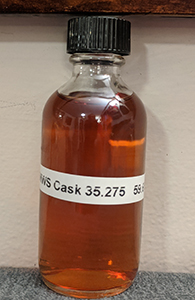 Following Monday’s Tamdhu and Wednesday’s Balvenie, let’s make it a whole week of 20+ yo Speyside whiskies. This Glen Moray was bottled by the Scotch Malt Whisky Society and they gave it the relatively restrained—by their standards—nickname “Desert Island Dr(e)am”. It was bottled from a first-fill toasted hogshead. I assume this means a relatively tired hogshead was reconditioned via toasting and then filled. Was this done at origin in 1994 or is this merely the cask in which this whisky spent some time prior to bottling? I do not know. If you know more about this please write in below. In the meantime, I will note that I have previously reviewed a SMWS-issued Glen Moray 24, 1994 and that too was from a first-fill toasted hogshead. I wasn’t overly enthused by that one, which I found to be far too oak-driven for my taste. Let’s hope this one puts on a better, less woody show—though given the dark colour, I am a little nervous.

Nose: Well, it leads with spicy, dusty oak but it’s not a tannin-bomb by any means. There’s quite a bit of red fruit (cherry) under the wood and some acid as well. Quite a lot of powdered ginger on the second sniff and some nutmeg as well. With time the oak subsides a bit—and it’s more polished now than dusty—and some apricot emerges to join it. Water pushes the oak back some more and pulls out some cream, softening the whole.

Palate: A big woody bite off the top but the fruit is there alongside it, holding the tannins in check. Drinkable but hot at full strength (the oak doubtless emphasizing the alcohol burn). Turns spicier as I swallow. This probably needs water but let’s give it some extended air first. It mellows a bit but only just a bit. Water incoming. A few drops of water bring out much better balance between the oak and the fruit; still quite spicy heading to the finish.

Finish: Medium-long. The spices tingle as it goes and some dried, almost woody orange peel emerges at the end. Not much change with water.

Comments: Well, I liked this more than the 24 yo—the oak is a little less pronounced. But there’s not a whole lot of complexity or development of the kind you’d want to find in a 25 yo whisky. Indeed, with the active oak influence it tastes quite a bit younger. Tasty but nothing so very special.