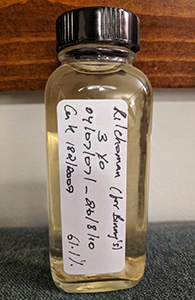 After a week of reviews of whiskies from Highland Park (which followed a week of reviews of whiskies from Glen Scotia) let’s do a week of reviews of whiskies from Kilchoman, Islay’s small farm distillery. This was the very first Kilchoman I ever had. It was bottled in 2010 for Binny’s in Chicago at the ripe young age of three. The distillery put out a number of these store exclusives among their earliest releases and they helped make their name in the US (and elsewhere too). Those were the days when Binny’s shipped out of state and I purchased a bottle right away. I drank it down slowly over the next few years and before finally finishing it in early 2013—as per my spreadsheet, a month before I started the blog—I put four ounces away for future reference, as was my practice at the time (well, my usual practice was to put away 6 ounces). In other words, this review is of a sample that was put away more than 8 years ago and from a bottle that was opened more than 10 years ago. Though I’ve stopped saving these reference samples in recent years, I do very much enjoy going back to some of the whiskies I drank a long time ago. I really liked this one back then, as I have a number of other young Kilchomans. Let’s see what I make of it now.

Nose: Bright phenolic peat with a lot of salt and cracked pepper mixed in. “Greener” on the second sniff with both green olive brine and hints of agave. As it sits there’s growing lemon and some charred pineapple. With more time there’s some vanilla cream as well. With a big squirt of water it gets brighter and the lemon turns to citronella. More of the agave-charred pineapple complex too now.

Palate: Comes in as promised by the nose with a big punch from the peat and the alcohol. Oily texture. Gets quite salty as I swallow. Continues in this vein with time and air. Okay, let’s add water. Water brings out some sweetness (wet stones rather than vanilla) and makes it more approachable. More char too now—charred meat, that is.

Finish: Long. The peat and the salt keep going. More char here too with water and there’s a meaty sweetness. Not as salty now.

Comments: First of all, I want to say that though this sample was put away more than 8 years ago it is absolutely pristine. Secondly, I am pleased to say that I like this as much now as I did back in 2010 when I bought it. This remains one of the best young whiskies I’ve had and almost certainly the best 3 yo. It’s clean, balances the big smoke well with bourbon cask fruit and coastal notes; it has no young whisky flaws. I’d take it over any of the recent high concept Ardbeg annual releases I’ve had; indeed, I like it a little more than the 11 yo from 2007 in which the vanilla was more pronounced. And as I said on that previous occasion, I’d love to be able to drink a 15 yo version of this distillate from bourbon casks next year. Someone make it happen. And I really wish Kilchoman would put out a regular 10-12 yo from ex-bourbon casks at 46%. It would probably give the Ardbeg 10, Caol Ila 12 and Laphroaig 10 a run for their money.