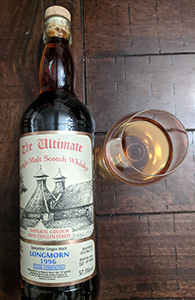 As you may recall, in 2013 the Dutch bottler van Wees released a large parcel of Longmorn 17, 1996s, all matured to a dark mahogany hue in sherry casks. As I noted, just under two years ago, when I reviewed another of these casks, these went for just about $65 at the far less attractive exchange rate of the time. I shudder to think of how much would be charged for similar bottles now. In that previous review—of cask 72324, purchased by my friends Clara and Rob at the same time I purchased this bottle—I also noted that if I liked it I would open this a month later. Well, I did like it and here I am, only a little behind schedule, with the review of my bottle. I actually opened this bottle at the end of May. When first opened I found it to be somewhat imbalanced. Though 57.5% is not crazy high as stupid abv goes, the combination of the alcohol and the oak seemed to me to overpower everything else in the whisky. After a few pours I set the bottle aside for a few weeks and when I came back to it the whisky had mellowed a fair bit. This review is taken from one of the later pours (the bottle is now past the halfway mark) and, as you will see, time in the glass and water are still very good to it. Anyway, here are some more detailed notes.

Nose: Big sherry nose with red fruit (plums) mixed in with dried orange peel and pencil lead. The high strength is palpable too. Softer notes of toffee and malt emerge on the second and third sniffs. Softens further as it sits: the malt gets creamier and there’s quite a bit more toffee now. Ah yes, with a few drops of water the alcohol and oak are all but gone and it continues on its mellowing trajectory. The cream turns to milky cocoa.

Palate: Pretty much as advertised by the nose. Brighter citrus and a big whack of oak as I swallow. Pretty hot at full strength but not unapproachably so. The brighter citrus emerges earlier with each sip. Mellows on the palate too with time: more malt and cream here as well and sweeter fruit (apricot, orange). Okay, let’s add water. Yes, just as on the nose.

Finish: Long. The alcohol bite and the oak are the main story here. With time the citrus pops up again at the end. As on the palate with time. With water there’s more fruit on the finish as the apricot lingers with the cream.

Comments: As I said in the preamble to the review this whisky still benefits greatly from time in the glass and then a touch of water. Before that it’s at a bit of a big sherry bomb mean: air and water soften and open it up nicely. This review was taken from a pour of about 2 ounces which I drank slowly over almost two hours. If you have a bottle I recommend similar treatment.