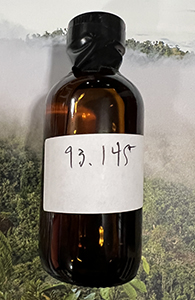 This week’s theme is Campbeltown but we’ll also keep last week’s bourbon cask theme going for a while with both today and Wednesday’s whiskies.

Today’s review is of another Scotch Malt Whisky Society bottling of Glen Scotia. With my usual scrupulous attention to detail I had listed SMWS 93.140 in this month’s “Coming Soon” post. When going to review it I realized that I’d already reviewed it back in June. What I’d meant to list was the 93.145, which is less than half the age of the 93.140. That one was 17 years old, this one is 8 years old; both are from refill bourbon barrels. I’m hoping it might be in the general ballpark of the other, which I really liked. And I have to say that I have, on the whole, quite appreciated the few SMWS Glen Scotias I’ve had. Given the general low visibility of the official releases in the US and the even greater paucity of indie releases here from other directions, the SMWS remains one of the few places where the profile of distilleries such as Glen Scotia (or Ardmore) can be explored (if not at a reasonable price, usually). Anyway, let’s see what this one is like. The SMWS tasting panel dubbed it “Sweet Filth” which is certainly promising.

Nose: A nice mix of earthy sweetness and more savoury notes (salted nuts). Preserved lime on the second sniff and the salt takes a briny, coastal turn. As it sits there are notes of peppery sweet olive oil and then carbon paper. The fruit expands as it sits—the lime is joined by some sweeter berry notes—and the savoury notes go from salted nuts to ham brine. A few drops of water and that sweeter fruit expands and some pastry crust emerges to meet it

Palate: Comes in pretty much as indicated by the nose but then there’s quite a bit of peat and some ashy smoke as I swallow. Hot but approachable at full strength and a nice oily texture. Continues in this vein as it sits and that’s just alright by me. Not as fruity here with time or water—instead it’s the austere notes that expand (lime peel, mineral oil).

Finish: Long. The citrus and the damp earth and ashy peat slowly fade out; quite salty at the end. As on the palate with water.

Comments: I had zero expectations but I really liked this. A lovely mix of austere and richer notes that put me in mind of Ardmore—and that’s never a bad thing. This is the kind of bottle that makes me think the SMWS might be worth it after all. And then I remind myself they probably asked for $120 for it. Are the current official releases in this ballpark? If so, I’d be in.