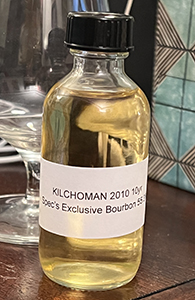 A week of Kilchoman reviews started on Monday with a 13 yo bottled for Spec’s in Texas. I liked that one quite a bit on the nose but found it increasingly dull on the palate. Today I have for you a review of another cask bottled for Spec’s, also a bourbon cask but this time a 10 yo. I’m hoping I’ll like this one a bit better.

Nose: Ah, I like this better than the 13 yo already: carbolic peat mixed with ash and lemon and salt. Cracked pepper on the second sniff and it gets quite coastal with briny-sweet aromas of kelp, sea shells and oyster liquor. After a bit some vanilla emerges as well. With more time and air the vanilla expands and is joined by a cereal note. Water renders it a bit anonymous.

Palate: Comes in as promised by the nose with the smoke getting a bit tarry as I swallow. Quite approachable at full strength and good texture. The tar pops out earlier with each sip and there’s some ink in there as well. The coastal character is not quite as much in evidence here and there’s not as much lemon here either as on the nose. Sweeter here too with more time. Water emphasizes the tar and then pulls out the lemon.

Finish: Long. The smoke gets tarry and then recedes into damp ash; cracked pepper and salt accompany it but it’s not very salty at the end. A little hint of agave as well and then with time some graphite. As on the palate with water.

Comments: A less brutal incarnation of the spirit compared to Monday’s 13 yo. Don’t get me wrong, this is still very peaty and smoky but the oak is not as aggressive and there’s more coastal character. Not sure how much this cost but I’d take it over the 13 yo without any hesitation. I may have added a bit too much water but I preferred this neat (especially on the nose).