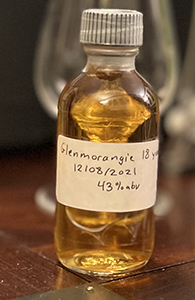 My last whisky review for January was for a malt from a highlands distillery (this Old Pulteney) and my last whisky review for February will also be for a malt from a highland distillery, this time from Glenmorangie. That Old Pulteney review kicked off a week of highlands reviews with stops at Glen Ord and Balblair. This week too will feature two more highland distilleries.

This sample of the Glenmorangie 18 came to me in a box from Michael Kravitz of the excellent Diving for Pearls (he’s not reviewed it yet himself). When he asked me if I was interested in trying it I was surprised to discover that I’d not ever reviewed the Glenmorangie 18. I used to drink it quite often back in the day when at $89 (or thereabouts) it was a very reasonably priced officially released 18 yo from a name distillery. It’s actually not very much more expensive now—it can be found for $99 in Minnesota. And so if I like this recent release as much as I remember liking those from a decade ago I may very well get a bottle. Let’s see how it goes.

Nose: Oranges and oak and browned leaves. Some roasted malt in there too and some toffee. As it sits the orange is joined by some apricot jam and the oak gets a bit dusty. With more time still some cereal notes poke through as well. A big squirt of water and the oak gets pushed back completely—much softer now with more toffee and some vanilla to go with the citrus.

Palate: More oak here and then an indistinct sweetness. A decent bite at 43% (though some of that is doubtless due to the oak—and a decent weight. The oak gets a little more bitter with each sip and the leaves show up here as well. Okay, let’s see what happens with water. Less oak here too and the citrus finally pops out earlier.

Finish: Medium. The oak is the top note here. The sweet notes kick in after a bit—sweet orange mixed with slightly metallic, slightly glassy notes. As on the palate with water.

Comments: Well, it’s been a while since I last tried the Glenmorangie 18 but I remember liking it more—and not finding it as oaky as I did this edition. I liked the nose throughout but it didn’t do much for me on the palate and finish. Drinkable enough but you probably want more from an 18 yo whisky.

Thanks to Michael for the sample.