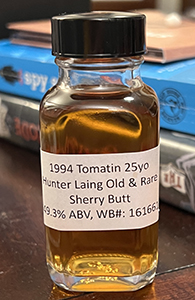 My week of reviews of 20+ yo whiskies from distilleries from different whisky producing regions of Scotland got off to a good start on Monday with the Arran 20, Brodick Bay. It then hit a bump in the road with Wednesday’s Kirkland 23, Speyside. Both of those had sherry involvement. The Brodick Bay was matured in both bourbon and sherry casks and then finished in oloroso sherry. The Kirkland was matured in bourbon casks and also finished in oloroso sherry. I close out the week now with a whisky that received a full-term maturation in a sherry butt. At 25 years old this Tomatin is the oldest of the week and I hope it will give it a good end. Older Tomatin can be very good indeed. The butt yielded 452 bottles, which may seem particularly low to those used to Glendronach’s outturns from sherry butts. Keep in mind though that there seems to have been a fair bit of spirit lost to evaporation—at cask strength this came in at just 49.3%. Let’s hope that means that this will be an extra-fruity Tomatin.

Nose: Citrus (between orange and lemon peel), oak and damp leaves at first. Roasted malt on the second sniff with some powdered ginger mixed in; the leaves are still here. After a bit there’s some darker, raisiny notes as well. With time the richer fruit makes its way out on the nose as well. Water pulls out some cream and a nutty quality to go with the fruit.

Palate: Comes in pretty much as indicated by the nose. Very nice drinking strength; texture just a bit too thinner than optimal. As it sits the fruit from the finish pops up earlier and expands. A lot more peach here now along with some apricot and brandied raisins. The oak is still here but providing a frame. Okay, let’s add a bit of water. Ah yes, water pushes the oak back further and turns the fruit a little darker and jammier.

Finish: Long. The oak crests and then there’s a big burst of richer, sweeter fruit (caramelized pineapple, peach) that goes on for a while. Oak spice again at the end. With time there’s apricot and fig jam and caramelized plantains. As on the palate with water.

Comments: This started out as a very good but not particularly noteworthy whisky. As it sat the oakreceded and the fruit expanded and it jumped up several points. If you have an unopened bottle I’d recommend giving it a lot of time in the glass to fully open up. And I’d recommend trying 2-3 drops of water as well.