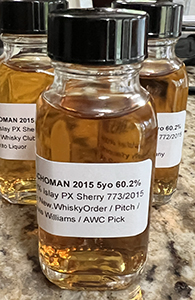 Kilchoman week did not get off to the best start on Monday. (I’m reviewing three young, PX cask Kilchomans this week.) I found a bit too much oak in Cask 772, which was bottled for the German market. Today I have a review of Cask 773, which was also distilled from 100% Islay barley peated to 20 ppm, and bottled at 60.2% (what are the odds?). But this was bottled for a consortium of North Americans—some Canadian, some American (you can get the details on Kilchomania). Will I like this one more? I certainly hope so. By the way, ignore what it says on the label: this one is 6 years old.

Nose: Leads with phenolic smoke with salt coming up from below. Some barbecue sauce on the second sniff along with some chilli pepper. Not much sign of the oak here or of red fruit. As it sits there’s a fair bit of char and cracked black pepper and some dried orange peel. More savoury as it goes with beef drippings and soy sauce. A few drops of water and the phenols recede a fair bit; softer now with toffee and milky cocoa.

Palate: Phenolic entry here too followed by the savoury notes and then sweet orange peel. Quite approachable at full strength with nice texture. On the second sip there’s some cherry and some pencil lead. More citrus with time, mixed in with some of the soy sauce from the nose. Okay, let’s add water. Much sweeter now with pipe tobacco, toffee and more orange peel but it’s also a fair bit sharper, with pepper, salt and a hint of savoury gunpowder.

Finish: Long. The smoke gets drier here and at the end salt emerges and dominates. More citrus here too with time. As on the palate with water with menthol coolness towards the end,

Comments: Well, I don’t know if both samples were drawn from bottles that had been opened at the same time and were at the same fill level but I like Cask 773 quite a lot more than Cask 772. The phenolic smoke and the sweeter sherry notes are in good balance here and the oak is very much in the background (palpable only via the char and the cracked black pepper). Let’s hope Cask 329 will be even better.